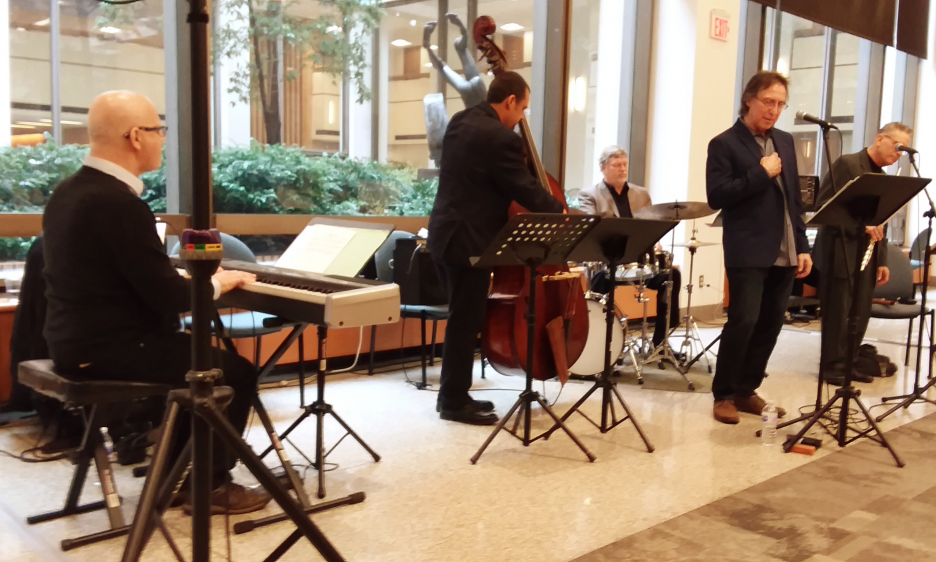 Paul Jost is an innovative vocalist whose rhythmic and exploratory approach has garnered him a special status among his peers and led to an expansive career of recordings and gigs in New York, Europe, and elsewhere. He is a regular at the historic Deer Head Inn in Water Gap, PA and the 55 Bar in Greenwich Village. His latest album, Simple Life (PJ Records, 2019), has been praised by critics, including Gloria Krolak of All About Jazz who wrote: "Paul Jost... is a master at unifying diverse and eclectic material... [He] makes every song so personally his own that it's easy to forget anyone else ever sang them." Perhaps the latter comment should be qualified by saying that, rather than emulating others, he has unified their many influences into a tightly organized powerhouse of improvisation, like the steam engine of the Orient Express.

On this occasion, he brought along frequent cohorts Jim Ridl on piano, Matthew Parrish on bass, and Tim Horner on drums. In addition, Jost recruited Philadelphia flautist Marc Adler, who also served as a cordial and knowledgeable emcee. They delivered a fast-moving, solid, and delightful show of what jazz at its best can be. And the setting was special: the Eakins Lounge where Thomas Eakins' massive painting of a surgical operation used to be on the back wall until it was transferred to the Philadelphia Museum of Art. It is a brightly lit large space with a sky-high ceiling and a huge glass wall with a backdrop of a courtyard, pleasurable and relaxing for an audience of over a hundred folks, mostly young people from the Sidney Kimmel Medical College. One could not help but feel the pleasant contrast with the dark and dreary caves called nightclubs.

The set began with Ellington/Tizol's "Caravan," whose forward-pressing rhythm was a perfect foil for Jost's percussive scatting. Adler delivered a fitting flute solo, and the rhythm section shone, as it did throughout. "Waltz New" is a song by the late great guitarist Jim Hall that is a contrafact, a term coined by the beboppers referring to the use of a different melody over the chords of a standard—in this case—"Someday My Prince Will Come." Jost and the group delved into all sorts of brilliant corners to explore the implications of the chords, transforming a deceptively simple song, from Disney's "Snow White and the Seven Dwarfs" that has become a jazz standard, into a genuine tour de force.

"James" is Pat Metheny's song dedicated to his late pianist Lyle Mays. Paul McCartney's "Blackbird" seemed to have special meaning for Jost, and he immersed himself in its dark emotions and subtle meanings as if he were living in its shadow. When Jost is at his best, it is as if he is undergoing a transformative life experience. This composition affects people at very deep levels, and the audience became absorbed in it.

The beautiful and treasured folk song "Shenandoah" provided an opportunity for pianist Ridl, who has a strong grounding in country and folk traditions, to provide a lyrical yet intricate solo, and for bassist Parrish to follow up with a lavish melodic improvisation. Adler's original "Narrow Escape" was an intricate instrumental work that moved around sub-movements with varied chord structures, rhythms, and embellishments that evoked cinematic images of someone escaping from the cops in an action thriller. It took these resilient musicians considerable skill to negotiate such a complex arrangement, which they did with apparent ease.

The set concluded with a fine rendition of Jerome Kern's perennial, "All the Things You Are," with Jost and the instrumentalists each doing extended improvisations that served as a guided tour of jazz, from swing to bebop, hard bop, and beyond.

Two lessons can be learned from this experience. One is that the best jazz singers like Jost who transcend the stereotype of a crooner and take flight into their own idioms are true meistersingers who provide a "steam engine" of stimulation for their sidemen. The other is that if you want to hear some really great jazz, go to medical school!