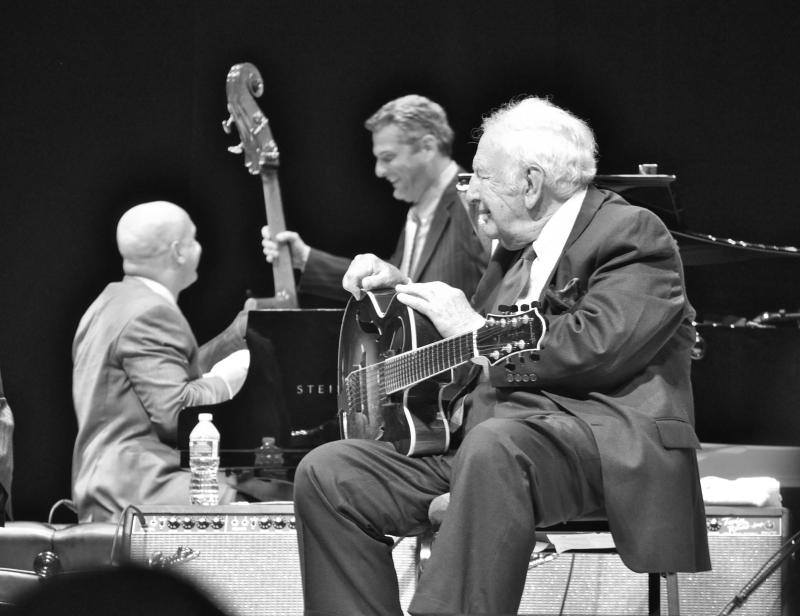 Kisses on the Bottom (Hear Music, 2012), the album of vocal standards Paul McCartney always wanted to make with The Beatles, is the knighted bassist/singer's first release in nearly five years. Diana Krall and members of the pianist-arranger's band back him on most tracks. The New York Times singled out guest guitarist John Pizzarelli's "buoyant, ukulele-like sound." Could the three leading Times jazz reviewers be referring to John's unmentioned father? Bucky Pizzarelli joined the band for one of the two recording sessions, after it turned out that John could only do one. Bucky went to the studio both days, "and we ended up playing together on two tracks," he told Jersey Jazz's Schaen Fox. Krall, her bassist and drummer were the only other players at these sessions. Violinist Andy Rothstein was added later on "Paper Moon," without Bucky's knowledge. When McCartney was growing up, Bucky said, "he learned a chord from a jazz player, and he showed us the chord on his guitar." String sections were overdubbed to two of Pizzarelli's tracks.

The Ben Webster Prize, Denmark's top jazz honor, is awarded yearly around the iconic tenor saxophonist's birthday by the foundation that bears his name. This year's winner, Copenhagen pianist/composer Jan Kaspersen, 64, accepted the 25,000 kroner ($4,477 USD) prize at Jazzhus Montmartre, Scandinavia's longtime leading venue for world-class musicians. The club was "Frog's" second home, where he often performed and hung out with his Danish friends and visiting American players. Awarded since 1977, the prize and other initiatives are financed by Webster's royalties. The Doug Raney Quartet, led by the American guitarist son of Jimmy Raney, set pulses up for the full-house ceremony, while Kaspersen put together a Danish dream band for the closing set.

What's the oddest venue you've ever played? That was the hasty assignment Grammy.com gave journalist Dave Helland—who asked for help from publicist Jim Eigo—who asked me and others for leads. German-American pianist Chris Hopkins promptly responded. Hopkins told of setting up on a platform next to a ski slope in the Swiss Alps, where it was so cold even the pianist had to wear gloves. In 2003, his Echoes of Swing quartet was hired to play in steamy Fiji. After a record 46-hour trip with layovers, they set up on an outside stage at a beautiful oceanside hotel resort. "It was incredibly hot and so humid we could hardly move. The real fun part was the piano. Humidity had caused the wooden keys to swell up so much that many keys stuck together, and didn't come back up after playing a note. We have photos of me taking the piano apart and tying spoons and pencils to the backs of the keys to give them enough weight to come back down. Somehow, we managed to play the concert, with a fair amount of inside joking."

"High school combos in West Hudson, take note," opened the story in the Newark News. "There's a trio of seventh graders in Kearny on the way up. The boys are ambitious, enthusiastic and aiming for the junior prom trade in a couple of years." Their book had 25 tunes, though "only 15 really sound good," the guitarist said. Fast-forward 53 years: In 2012, one of those 12-year-old rock 'n' rollers, Tony Mottola, Jr., has grown up to play jazz guitar and piano—for himself. The son and namesake of the world-class guitarist, Tony Mottola, spends much time quietly editing and shooting fine pictures for Jersey Jazz, journal of the New Jersey Jazz Society. "He plays mostly pianny, in his apartment—except occasionally, Mr. Modest decides to surprise everyone and play a few bars when least expected," allows his co-editor, Linda Lobdell, adding: "He also plays guitar with sophisticated fingerings and style, but if you ask him whether he plays, he says no." Maybe it depends on who asks— and for what?

Willis Conover Looks at "Jazz And the Cold War" in Podcast

America's secret weapon during the cold war was the late Willis Conover's Jazz Hour, beamed on shortwave radio by The Voice of America across Russia and Eastern Europe. Starting in 1955 and aired nightly for over 40 years, Jazz Hour spawned generations of jazz musicians behind the Iron Curtain. Two veterans, Czech bassist George Mraz and Russian trumpeter Valery Ponomarev, as well as Conover, talk about the era in a 13-minute podcast, Jazz and the Cold War, co-produced by Jazz At Lincoln Center. Google JALC podcasts and hear it free on iTunes.