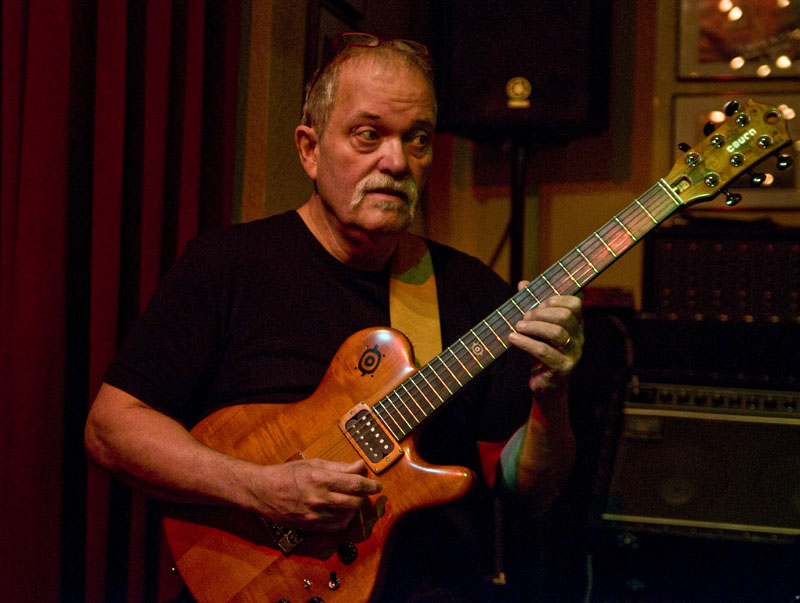 I like free playing that has some relationship to a melody...I think having a reference point when you're playing this kind of music is very important. —John Abercrombie

Guitarist John Abercrombie is arguably the guitarist of his generation who pushes the boundaries of improvised music while still relating, most directly, to the jazz tradition. While others dabble with electronica, jam band sensibilities, world music and Americana, Abercrombie, no matter how forward-reaching his music has become, is always first and foremost a jazz guitarist. Even with the more free-thinking chamber work of his current quartet, there is a clear tie with tradition that separates him from his peers.

"I guess it more or less comes from the idea that, with a lot of my songs, I'm definitely writing harmonic music," explains Abercrombie. "I don't write tunes that are very out sounding; I tend to write songs with harmonies. That's coming from the tradition of jazz; it's coming from playing standard tunes. I think that's where my root is, and a lot of people don't know that. If there's anything I practice and work towards it's that kind of concept; trying to negotiate how to improvise over more standard song forms. So when I write my own tunes I see them as an extension of standard songs in a way; they're harmonic, they have melodies. They're not trying to forge particularly new ground, although my harmonies and forms are different than standard forms—they have a lot of odd bar lengths and unusual harmonies. But the idea is to play somewhat in the jazz tradition, but extended.

"I was very influenced, back when I met people like Ralph Towner and Richie Beirach," continues Abercrombie, "and Wayne Shorter was writing all his beautiful songs with Miles. I got very influenced by that kind of harmony and that kind of improvising. So I've always been trying to keep certain things in sight. That's what my goal is, to become a better jazz musician, even though it may not sound that way at times."

Abercrombie has also strived to expand the limits of the instrument, through use of guitar synthesizers in the '80s and, on a more frequent basis, through altering the sound of his instrument with the use of effects. "I think that even though I don't still play the synthesizer," says Abercrombie, "that using certain effects and trying to get a different sound out of the guitar—not always playing it with a traditional sound—I think that's where I really stop sounding like jazz guitar; and that's intentional. If I'm using, for example, a little distorted sound, then I'm trying to evoke some kind of mood. I find that the sound is very important to me in terms of how I express myself. So if I'm getting a slightly altered sound on the guitar that will make me write and hear and play differently than I would if I were playing "Stella by Starlight" or some other standard. So the approach will be different, and that's where I branch off and go way from the tradition of jazz; and sometimes it just doesn't sound as much like a guitar."

Over a thirty-year period, Abercrombie's growth as a leader has been well-documented through his association with Manfred Eicher's ECM label. But while there have been numerous side projects, Abercrombie has only worked with four groups for any length of time. A good introduction to his work for the label can be found on his recently release, :rarum XIV: Selected Recordings , which documents his growth as a leader, as well as in some musical relationships that continue to this day.

His first quartet, with pianist Richie Beirach, bassist George Mraz and drummer Peter Donald, released three albums on ECM—Arcade , Quartet , and M , and are the only recordings of Abercrombie as a leader that have yet to be reissued on CD. "I never really understood why ECM didn't release those disks," Abercrombie says. "I did speak to Manfred one time about it, and he said that eventually everything will come out on CD. But that's why I chose a tune from that period to include on the :rarum disk; I really wanted that period represented.

"It was probably the most influential group," Abercrombie explains. "It was my first group as a leader, so it was extremely important for me to have that band, for many reasons. It was, of course, a good band, but it was also my first opportunity to really be a leader and it was my first opportunity to write consistently for the same group of musicians. The fact that Richie, George and I all lived in New York; Richie and I would get together several times a week at his little apartment and we'd just play through songs. It was a real kind of workshop; without that band I wouldn't have had other bands, it was the starting point and it was, I think, a good one.

"It was an opportunity to write and play more traditional types of song form," continues Abercrombie. "That band never really delved much into playing what we would call free jazz, we pretty much played songs. And we played standards at gigs—we didn't record them, but we included them in our repertoire for concerts. I think that was a real opportunity to just go completely into playing on form and songs, because I had come out of playing with Billy Cobham and Jack DeJohnette. I really longed to play harmony; being a guitarist harmony is a real natural choice, so I think that band was really important, from that aspect."

One of Abercrombie's lasting memories about the first quartet was one of their recording sessions for ECM. "I remember doing one session, and we were listening to a playback and Manfred was saying, "How do you like that?" I was saying, "That seems fine, I kind of like it." Then George said," I can live with that." And then there was a silence and George came back with, "You know, I think I have to buy myself a bigger house soon," and I said, "Why would you need a bigger place to live?" and he said, "Because of all the shit I have to live with, I have no room for myself anymore."

"I just thought that it was a funny moment," continues Abercrombie, "but it was also really kind of to the point. You're always saying, "Well, I can live with it." And you wind up living with a lot of stuff that you really don't like that much, but you just live with it anyway. With every recording you make, it's out there and it's documented, so you just kind of have to live with it; you have to live with how you play and how you are, and I think that was kind of an insightful thing to say. But of course when he said it everyone just cracked up because it was so funny, and George is a very funny guy."

Abercrombie's first group lasted only four years; his second group, a trio with bassist Marc Johnson and Peter Erskine, lasted longer—over seven years. "The second band was an opportunity to try a lot of things," says Abercrombie. "It was a guitar trio, which was something I always liked to play in, to play traditional music. But it also gave me the opportunity to play around with this beast of a thing called the synthesizer; I fooled around with it for almost the entire period. A lot of people didn't like it, but that's where I was at the time. Marc, having played with Bill Evans, gave me a strong connection to that music, which I loved. Then Peter brought in the whole Weather Report element. Sometimes we would improvise these sorts of rock pieces that would sound better than anything I could write. And so I had this lyrical bassist and lyrical drummer who were also capable of playing really loud and strong, really bringing the fusion element to the music if we wanted it. The original quartet couldn't do that, because we had an acoustic piano. I think the reason to switch up was that desire to play louder, more open kind of music, not having a keyboard dictating where I could go."

Abercrombie's third group, another trio, also lasted about seven years, but represented a significant change over the group with Johnson and Erskine. Playing with organist Dan Wall and drummer Adam Nussbaum, the ensemble was rooted in the organ trio tradition, but took a more modern slant. "The trio with Adam and Dan came about because I've always loved playing with organ," explains Abercrombie. "Adam and I actually had a record date with another organist, Jeff Palmer, a really good organ player, but very abstract. I remember we did a couple of projects with him, and I was really taken with that combination, this guitar, organ and drums combination, but with a more modern approach. And so we got together with Dan Wall one time, and it was just obvious from the beginning that we wanted to do this. I think the desire to do it was to get back to the sound of the organ, which is something I've used on Timeless and another CD called Night ; plus my roots go back to organ trio playing, from playing with a guy named Johnny Hammond Smith back in the late '60s, which was my first real jazz gig.

"Also, I'd always wanted to play with Adam," continues Abercrombie, "because he's one of the most comfortable drummers in the world to play with, he has such a great wide-open feel. You can play anything with him and it all works because he's just so adaptable, and he swings so hard, and I really wanted somebody who had a little more of that kind of feel on drums. Erskine had a different feel; Adam is a little more related to Elvin Jones and that kind of drumming, and I was having a really strong pull in that direction."

In and around his various groups, Abercrombie also guested on many recordings for ECM. One of the most memorable of the '70s was with Italian trumpeter Enrico Rava's group, which also featured bassist Palle Danielsson and drummer Jon Christensen. They recorded two albums for the label, The Plot and, most notably, The Pilgrim and the Stars , which is considered one of the label's classic recordings. "That particular quartet," says Abercrombie," was one of my favorite groups to play with during that period, because it was a wide open experience; playing very freely, but we were playing song forms and we were also playing stuff that didn't have any form. The rhythm section was so adaptable and musical; Palle is just an amazing joy to play with; the same with Christensen. And playing Enrico's little tunes, they just allowed you to play very openly even though you were playing over song forms; I can't describe it, but they didn't lock you in as much, even though a lot of them had harmonies and specific forms. They felt very open and the approach the musicians took to playing them was very open.