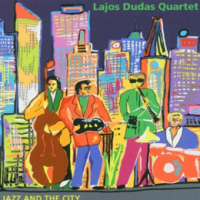 Lajos Dudas' What's Up Neighbour? (JazzSick, 2011), was a collaboration with pianist Hubert Bergmann. An eminently enjoyable set of improvised tunes, the album highlighted the veteran clarinetist's love of and talent for improvisation. Jazz And The City showcases Dudas' skills in a more straight-ahead setting, leading a quartet through a set of standards and originals. The humor and good-natured love of the music remains, albeit within a more structured set of tunes.

On Jazz And The City Dudas combines four of his own tunes with half a dozen well-known standards. Dudas and guitarist Philip van Endert weave their melodies over bassist Martin Gjakonowski and drummer Kurt Bilker's swinging, occasionally funky, rhythms. The lead players both have warm, flowing, styles that engage beautifully with the classic lines of Jimmy Van Heusen's "Here's That Rainy Day" and Harold Arlen's "I've Got The World On A String." Dudas' arrangement of Leonard Bernstein's "America" is less successful; his soft, smooth, clarinet style fails to match the assertiveness of Bilker and Gjakonowski's strident rhythm, which better encapsulates the song's energy.

"Just Friends" is a beautifully sedate take on the Klemmer and Lewis classic. Dudas' tone is at its warmest and woodiest, while the other band members offer sympathetic, thoughtful support; it's a master class in musical sensitivity.

Dudas' compositions are characterized by a gentle swing, a relaxed vibe that makes them sound familiar and comforting. "Cab Car" has a late night bluesy feel, accentuated by van Endert's guitar solo. While "Riffs" is a jaunty, cheeky, upbeat tune. "Miles" and "Soft Waves" are rich, heartwarming, numbers that mix balladry with Bilker's solid drumming and some fine comping from van Endert.

Dudas originally released Jazz And The City in 2004 (Konnex Records). It's part of an extensive discography—over 30 albums since 1977—that includes works by Johann Sebastian Bach as well as mainstream jazz and improvised music. This is a welcome rerelease from a stylish master of the clarinet.