Jazz: An Introduction to the History and Legends Behind America's Music 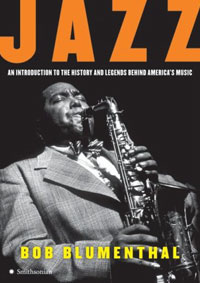 Distinguished critic Bob Blumenthal offers up an intelligent, concise history in his book Jazz: An Introduction to the History and Legends Behind America's Music. While writing such an overview is certainly a formidable task that many have attempted with varying success, Blumenthal, a former Boston Globe columnist who has won numerous awards for his writing including a Lifetime Achievement Award from the Jazz Journalists Assocation, lives up to the challenge.

Grouped in sections each covering approximately 20 years, the 192-page book takes readers through the evolution of jazz, from its nascent days in New Orleans up to modern times. Not only does Blumenthal write authoritatively about the music, he also places the musical phenomena of the day in their proper historical, sociological and economic perspectives, and thus conveying the complex role the development of jazz played in a larger landscape. For instance, Blumental explains how after World War II many of the nation's ballrooms went out of business, greatly affecting the popularity and viability of the Swing-era big bands, leading, in turn, to the development of smaller ensembles and, ultimately, the bebop revolution.

Blumenthal introduces the reader to many jazz greats; Louis Armstrong, Miles Davis, and Ella Fitzgerald are just a few of the names he touches on. For those already knowledgeable about the music, most of the information presented here won't be new, though it's always helpful to have it presented in an organized fashion. For the neophyte, on the other hand, Blumenthal's book is a perfect introduction, especially with its listening suggestions. One could easily picture it used successfully as a textbook in classrooms around the world.