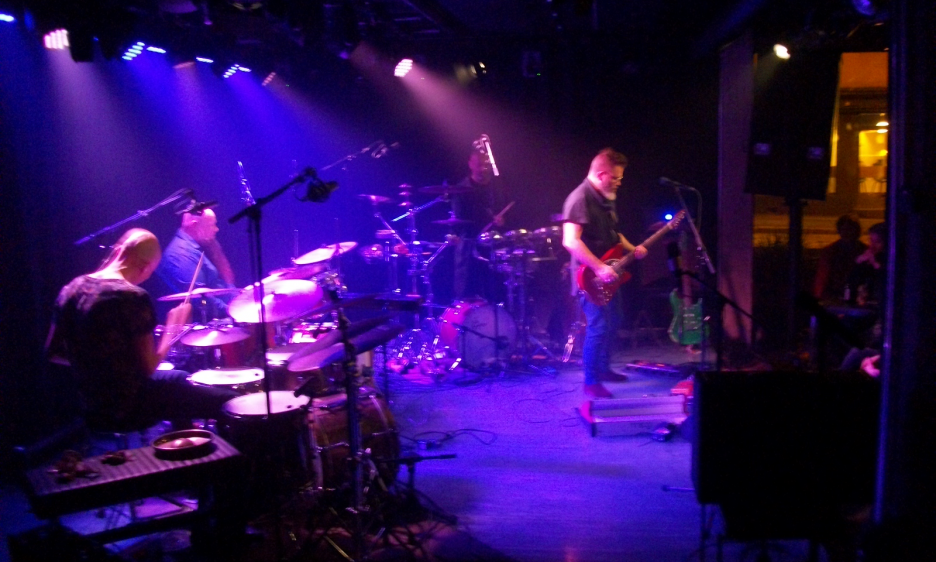 Jarmo Saari has been making music on the Nordic scene for more years than most of us care to remember. As a child he was involved in the Tapiola Choir in Espoo, the Helsinki suburb synonymous with high art of visual as well as musical nature. As an adult he has been involved with music often associated the visual, at least since his sophomore album A Tribute to Finnish Cinema (EMI, 2001). His latest project, solo guitar accompanied by 3 drummers and going under the title Jarmo Saari Republic, has a similarly associative, multi-media style.

There's no denying that Saari is a master of all facets of his instrument. He solos and accompanies with aplomb and frequently a lightness and a delicate mixture of the harmonic and the discordant. Through his career he has also developed his ability to manipulate the myriad opportunities afforded by digital processing, taking the "git-box" into realms undreamt of by old jazzers.

The drums on the other hand have changed precious little since the dawn of time. And his three accompanists in Helsinki are all masters of their art, also capable of deftness and delicacy. Of the three on hand, the one with the closest affinities to rock, Sami Kuoppamäki of the former Finnish trance rockers Kingston Wall, was replaced on the night by Mikko Kaakkuriniemi. His colleagues Abdissa Assefa and Olavi Luohivuori are both renowned for their work with acoustic outfits in the spheres where Saari was originally associated, ethnic and jazz, both of which made their show on the night.

But with so much percussion on hand the dominant impression of Saari's music nowadays, as he declares on the video introduction to the first album under the Republic title, is that maybe he chose the wrong instrument to specialize in! In the studio he often adds a theremin to his mixes, but in this gig it was mainly a selection of standard guitar effects, loops and a set of Taurus pedals to boost his bass lines. Additional colors came from added spoken word insertions, such as Chaplain's speech at the end of The Great Dictator—"so long as men die, liberty will never perish."

The music would have been perfect for dancers, but G Livelab is more renowned for its excellent sound system. So it was only when Timo Lassy joined the band near the end of the second set, that my toes began to twitch and Saari to bob behind his guitar. The second tune with Lassy was one that appeared on the first album of Saari's original ethnic-jazz line up Zetaboo and indicates how his music has evolved during the 25 years since. A naive searching melody, named after and dedicated to his mother, Maria shows that simple can be as powerful as three swarthy males in sweatshirts. Saari certainly likes to take his audiences on extended journeys, and mix up his media along the way.