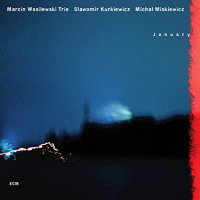 From the first notes of the beautiful and seductive January, two things are immediately evident— that the piano trio, now named after its pianist Marcin Wasilewski, is making a true statement of purpose, and that this recording is an arrival achieved through sound, primarily Wasilewski's rapturous sound.

Wasilewski, bassist Slawomir Kurkiwicz and drummer Michal Miskiewicz have been together since 1993, and were noticed by trumpeter Tomasz Stanko. Over the course of time, they have released three highly acclaimed ECM albums with Stanko—Soul of Things (2002), Suspended Night (2004) and Lontano (2006)—plus their own album, simply named Trio (2005).

All the while, the group was naturally growing, honing its sound and developing a musical identity both within and without the orbit of Stanko. The name change from the Simple Acoustic Trio, which implied a collaborative arrangement, to the Marcin Wasilewski Trio, is an acknowledgment of the reality that the pianist is at the center of the group's being.

If pianist/composer Jon Balke, on Book of Velocities (ECM, 2008), asked about the nature of pianistic touch, Wasilewski answers it, since his playing is all about touch. His musical conception begins with the velvety timbre of his individual notes, extends to the manner in which their harmonics interact by purposefully overlapping them either through the sustain pedal or by technique, and finally includes chosen chord voicings and arpeggiations.

Taken together, the piano shimmers and sings with an enveloping and caressing sound. Added to this lustrous cloud, however, is a distinct seriousness and intellectual rigor that supports, controls and directs the flow of the music. Kurkiewicz and Miskiewicz are integral in this aspect of the trio's sound, responding and commenting on Wasilewski's phrases and lines as each piece unfolds.

The trio's rhythmic sense is magical, hovering between pulse-less rubato and exciting swing that evolves out of thin air, taking off on Carla Bley's "King Korn." Adding to this feel of "formless form" are Wasilewski's compositions and the group's cover arrangements. The music sounds very simple, and yet clear melodic lines and chord progressions are the exception, creating a strong sense of floating, but with an equally strong sense of direction.

The result is music that has many layers which can be heard operating both independently and together, carefully seductive yet avoiding the overt while still producing a powerful effect. Each piece proceeds at a leisurely pace, with a number of tracks lasting more than eight minutes. However, despite the music's circular feel, there is not a moment wasted as Wasilewski and company weave their spell.

January is a joy to listen to, cementing the reputations of Wasilewski, Kurkiewicz and Miskiewicz both individually and collectively.