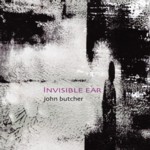 It is a pleasure to welcome John Butcher's Invisible Ear back into circulation on his own label. Originally released in 2003 as a limited edition on the Italian label Fringes, it has long been unavailable. For Butcher aficionados or followers of improvised saxophone, the album makes essential listening. Butcher has long been an intrepid explorer of his saxophones, and Invisible Ear is one of his more remarkable sets of explorations as he experiments with close miking, multi-tracking and feedback saxophone. Although credited to John Butcher alone, the listening experience belies the term "solo album." At times it is impossible to tell how many players are in action or if they are actually playing saxophones.

Tellingly, the album opens with a sustained note on soprano sax of such high frequency that is sounds electronic. And Butcher has said this album reflected his experience of working more closely with computer and electronics musicians. The close miking of the straight horn reveals an incredible amount of detail of Butcher's technique, capturing every nuance of breath and embouchure as he strays into frequencies that are close to the threshold of human hearing.

The variety of sounds that Butcher can extract from his saxophones is starkly illustrated by the transitions between the three tracks "Cup Anatomical," "What Remains" and "Streamers." In turn, Butcher employs close miking then multi-tracking then amplified/feedback tenor sax. The stripped-bare starkness of the first is replaced by a rich, slowly-evolving ensemble piece achieved by overlaying five tenor and three soprano saxophones; the planning that must lie behind this track is mind-boggling, as it sounds like eight players interacting with each other in real time—and interacting amazingly well and sensitively. If eight players had played it, is would be an astounding piece, for one alone to have done so is extraordinary. Leaving that behind, we move on to the strangely detached eeriness created by amplified feedback tenor, one of the more unsaxlike sounds here. In concert, it is fascinating to see Butcher produce the sounds, seemingly by magic, without blowing through his horn. On disc, that technique is less important, but as with so much here, the sheer musicality is the most striking feature of the sounds that Butcher produces.

Invisible Ear is a rich treasure trove of innovations which Butcher—and doubtless other sax players—will be exploring for years to come. Luckily, this re-issue is not a limited edition and makes the music available to those who missed it the first time around.