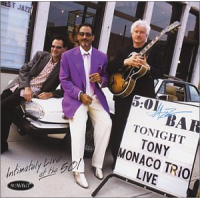 Hammond B3 specialist Tony Monaco is allowing no grass to grow beneath his feet. In August 2001, he released Burnin’ Grooves, a jazz organ trio extravaganza produced by Joey DeFrancesco, who’s trio contributes to over half of the recording. Then, six months later, Monaco releases Master Chops T, with an expanded band and repertoire. Both recordings met with considerable praise and bestowed on Mr. Monaco the label "leader of the B3 revival."

Now, the new master hits us with a live recording (the only way to really hear jazz, particularly that of the greasy variety). Intimately Live at the 5:01 is a surreptitiously recorded date at the 5:01 Jazz Bar located at 501 Park Street, Columbus, Ohio, Tony’s home digs. Mr. Monaco has had a regular gig there for over a year. For this outing, Mr. Monaco employs the traditional organ-guitar-drums trio. He has Robert Kraut, a professor at The Ohio State University, on guitar and Louis Tsamous on drums. As a unit the trio is a seamless groove machine conquering the greasy terrain of the 21st Century edition chicken shack.

Organ jazz always has the smell of cigar smoke and scotch whiskey and this recording is no exception. Mr. Monaco peppers his set with covers from Jimmy Smith, Joey DeFrancesco, and then some surprises. As expected, the blues are well represented. From the serpentine funk of "The Cat" to the slow gutbucket of "Takin’ My Time" to the sweet sophistication of "Take The Coltrane" the organist demonstrates that his blues chops are well intact and growing. His talent with standards and ballads is equal to that of his talent for the blues. "I Can’t Give You Anything But Love," "It’s Only A Paper Moon," and "Sweet Georgia Brown" are uniformly fine and swinging. However, where Mr. Monaco really shines is on his ten-minute dialog with "I’ll Close My Eyes." He takes this piece at a deliberately slow pace, filling all corners of the song with brilliant B3 filigree. Guitarist Kraut proves his metal on this ballad after working out his blues chops on the hotter numbers. Musically, the most pleasant surprise is Mr. Monaco’s inclusion of Wayne Shorter’s "Footprints." Not the usual fodder for an organ trio. "Footprints" is a ten-minute revelation of the future of organ jazz, appropriately provided by the keeper of the flame, Tony Monaco.