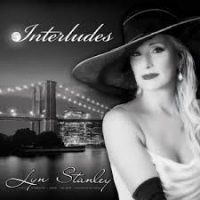 Vocalist/producer Lyn Stanley has established herself as a foremost stylist of the Great American Songbook. That is no mean feat. The sheer amount of vocal music made each year around the Songbook is impressive. It is too bad that the quality of a great many of those recordings is not equally impressive. Stanley's two previous recordings, Lost in Romance (A.T. Music, LLC, 2013) and Potions: From the '50s (A.T. Music, LLC, 2014), have been an evolving prelude to the present. "How Long has This Been Going On," the opener for Interludes demonstrates Stanley's command of the standard.

But it is not the jazz standard that is special about Interludes. Stanley addresses two more recent compositions: "Black Velvet," released by Alannah Myles in 1989 and Led Zeppelin's "Whole Lotta Love," from Led Zeppelin II (Atlantic, 1969).

Lyn Stanley takes on the most white-hot anthem of the carnality of youth. She does so unflinchingly. There is little to be nostalgic about young love once you've learned what you are doing. And that is Stanley's point with covering this song. Arranged by guitarist John Chiodini the nominal blues-rock monolith becomes a steamy rumba propelled by bassist Chuck Berghofer and drummer Paul Kreibich, whose deft tom-tom work amps up the performance's already heady sensuality. Then, there is Stanley, who produced this recording, ensuring that a proper mixture of Bobby Gentry's "Ode to Billy Joe," Peggy Lee's "Fever," and Dusty Springfield's "Son of a Preacher Man" are admixed into one grown up vision of love, sex, and the whole shooting match. Think if George Gershwin had composed "Summertime" with J.J. Cale and you may begin to get the idea. Stanley must be applauded for taking this gigantic artistic chance. So many "jazz" covers of contemporary material end so badly. In this case, not so. This is a special release in every way.