By EDWARD BLANCO
December 9, 2008
Sign in to view read count 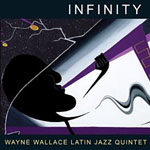 Distinguished trombonist and composer Wayne Wallace presents another sparkling album of Latin jazz music hot on the heels of his previous critically acclaimed release The Nature of the Beat (Patois Records, 2008) with Infinity, his fourth production for the Patois label and his second of 2008. Known as "The Doctor" for his production skills, Wallace produces another exciting album of Afro-Cuban Latin jazz music, which now has become his specialty and trademark. For this offering, Wallace brings together four original compositions and provides Latin-tinged arrangements to standards from George and Ira Gershwin, Eubie Blake, and Freddie Hubbard to name a few, rounding out the repertoire with the samba "As Cores Da Menina" from Jovino Santos Neto.

The album, by the Wayne Wallace Latin Jazz Quintet, features Murray Low on the piano, David Belove on bass, Michael Spiro on Latin percussion, and Paul van Wageningen on the trap drums. Not content with this stellar cast of players, Wallace chose to augment the personnel with special guests Roger Glenn on the flute and vibes and a group of vocalists including Jackie Ryan who provides lead vocals on "Love Walked In" and "Close You Eyes" as well as Orlando Torriente who does the vocals on "Songo Colorado."

Eubie Blake's "Memories Of You" is performed as a soft and lovely, warm Latin jazz ballad with Wallace providing the lead and a new read of a familiar melody interpreted by such greats as Ellington, Benny Goodman, and Louis Armstrong. Switching gears a bit, Wallace gets right down to core Afro-Cuban rhythms with shoulder-moving "TBA." The trombonist puts a jazz mambo spin on "Close Your Eyes," voiced by Ryan and containing a terrific piano solo from Low.

The program closes in style with the vibrant "Cha-Cha De Alegria" complete with beautiful playing from guests Glenn on both the flute and vibes as well as a vocal accompaniment from no less than eight individuals, then ends with the Latin Funk number "Straight Life/Mr. Clean." Those favoring Latin jazz will most assuredly favor Infinity and the Latin rhythms produced by Wayne Wallace and his Latin Jazz quintet.