The Slam Trio: In the Stillhouse (Live) 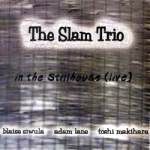 For all his efforts organizing the Sunday night COMA concert series in Manhattan's Lower East Side, saxophonist Blaise Siwula is underdocumented on record. But he did get away long enough in 2004 to do a three-day New England tour with a strong trio alongside bassist Adam Lane and drummer Toshi Makihara. The last night, in Portland Maine, was captured on tape and put out by Cadence, which has released four other Siwula sessions.

And from the sounds of it, Siwula was ready to hit the road. On the first of the three long tracks, the group hits hard, beating its way through a furious sixteen minutes. But lest you think you know what to expect, the second track plays with some delicate moments and the third toys with meter and march. There aren't readily apparent themes, but the group shares the cohesion of working it on the road, even if it was just a long weekend.

Like Jim Staley and his work at Roulette, Siwula might be better known if he weren't spending part of his time promoting a concert series. But the upside of that is he can be heard most Sunday nights at ABC No Rio—and on record, or in person, he's well worth a listen.

About The Slam Trio