Lisa Hearns: I Got It Bad and That Ain't Good

By WOODROW WILKINS
January 26, 2009
Sign in to view read count 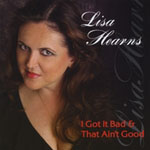 Nearly a decade ago, the jazz world was introduced to Jane Monheit, an upstart singer with an exceptional voice. Monheit put a fresh face to several standards with her early releases. Lisa Hearns is in that same mold.

The daughter of two music professors, Hearns grew up in Massachusetts and is a graduate of the Berklee College of Music. Though she has sung professionally and made several recordings, I Got It Bad and That Ain't Good is her first foray into jazz. She is aided by Grammy-winning producer Elliot Scheiner. Accompanying musicians are Kelly Friesen on bass, Keith Ingham on piano, Arnold Wise on drums, and guest guitarist Howard Alden appears on several tracks.

Hearns starts this 10-song set with the title track. In elegant lounge singer fashion, she brings an earthy touch to the Ellington/Webster composition. It begins as a duet between Hearns and Alden, and then the other musicians join in. During the middle break, Friesen solos, accompanied by Ingham and Wise. Hearns demonstrates some impressive control during a series of roulades before the closing sequence.

The French "Plus Je T'Embrasse" is delightful. Hearns' voice provides just a touch of sass. Ingham and Alden add to the spirit with solos. The bass and drums, though in the background, add their emphasis as well.

Alden helps carry the rhythm on the upbeat "Wild Is Love." Freisen features prominently. Ingham's solo is punctuated by Wise's rim shots. And, as she does, Hearns sings with a joyous flair.

The one non-jazz song that's covered here is the Motown classic "I Heard It Through the Grapevine." Hearns is an effective lead vocalist who shares the spotlight with her accompanists. Likewise, the musicians are involved enough to be noticed both individually and as a group, but they don't dominate.

I Got It Bad and That Ain

Title: I Got It Bad and That Ain't Good | Year Released: 2009 | Record Label: QuickSilver Records