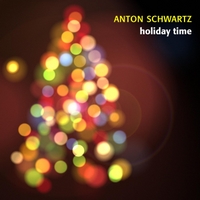 Holiday Time is the third recording by San Francisco Bay area resident Anton Schwartz, although this outing finds him fronting a new quartet. Schwartz is a native of New York, where he studied with the late Warne Marsh and Eddie Daniels, and his big, round sound is front and center once again. One does not generally approach a holiday album expecting to hear anything markedly new or original. Nonetheless, this specially priced, 27-minute CD still packs a pleasant surprise or two, as well as a modicum of humor. All arrangements are Schwartz's.

"Jingle Bells" opens with the out-of-tempo, re-harmonized verse as introduction. The first chorus swings out in a brisk, bluesy 4/4 over a 6/8 rhythm, followed by tantalizing 6/8 solos by Schwartz, then Hirahara. "Winter Wonderland," again featuring Schwartz and Hirahara, is interestingly done as jazz-laced reggae, with sax overdubbing on the coda; it must be difficult to play the tenor sax with tongue planted firmly in cheek. At just under four minutes, this is the shortest selection of the five.

"The Christmas Song" is presented straight as a languorous ballad, demonstrating Schwartz's full, rich, breathy tone and languid vibrato. Schwartz solos creatively, as does Wiitala on bass on the bridge, before Schwartz once again brings it home. On Leroy Anderson's "Sleigh Ride," one of the horses seems to have turned up lame; this roasted chestnut is refreshingly relieved from tedium by a crisp 7/4 Latin rhythm. The album deliciously concludes with an unexpected after-hours ballad, as Santa arrives "In the Wee Small Hours of the Morning."

Play this on Christmas Eve with a glass of egg nog, and see if the "some assembly required" doesn't proceed just a little bit easier...

Visit AntonJazz on the web.