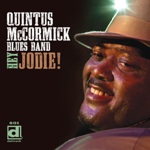 It's clear from this release that Quintus McCormick has undergone a radical change of direction in the course of his musical life. In his formative years he was by his own admission hung up on Steve Howe of Yes but it's clear that as of November of 2008 when this set was recorded the fixation had long since passed. In the meantime he's become a master of what might be called the nuances of the blues, especially with reference to the overlap between the idiom and that of southern soul.

The results have depth and resonance chiefly because McCormick has a knack for nailing the everyday injustices. Thus "What Goes Around Comes Around" is telling because, for all of the banality of the lyrics, his delivery, both impassioned and ironic, takes hold of the words and injects them with sincerity born of experience.

The same can't be said for the title track however, which sacrifices feeling for surface sheen. Whilst the reading isn't perfunctory, it doesn't rise much above the kind of slick professionalism that might play well to a very uptown audience but doesn't really do much more despite the leader's deft guitar work.

"Hot Lovin' Woman" has an unexpectedly wistful air about it as McCormick lays out the details of the kind of woman he's looking for. Vocally he's as far away from the blues as he is at any point in this program but his intentions are honorable, tempered by experience rather than mere braggadocio. The fade however seems to suggest that he can't get what he's looking for, at least not immediately.

"Get That Money" is as overdriven as anything here but the subject matter is at least delivered with a sense of irony that is only reinforced by the call-and-response between McCormick and his backing singers. For good measure he fires off a guitar solo that smartly straddles the divide between the overdriven and the economic.

There's maybe also an economic element to "Get You Some Business," although it's clear that McCormick has social matters in mind as much as anything else. His deft guitar lies at the heart of the band especially in solo, where his grasp of dynamics ensures that every note tells and he never falls prey to mere hyperbole.

Given the prevailing musical climate a title like "Piano Texas Blues" seems a little anomalous but such is the range of McCormick's song writing that it fits right in anyway. The vagaries of everyday life are again his concern and it's that which raises his game.

Hey Jodie! (Take Good Care Of My Baby); Get You Some Business; What Goes Around Comes Around; You Should Learn From This; Fifty / Fifty; You Got To Do Me Better Than That; I'm Alright Now; Get That Money; Hot Lovin' Woman; Piano Texas Blues; I'm A Good Man, Baby; I Wasn't Thinkin'; There Ain't No Right Way To Do Wrong; You Got It; Let The Good Times Roll.