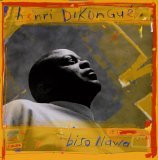 While his recordings have made liberal use of production to enrich texture, Cameroonian musician (and now Parisian expatriate) Henri Dikongué is first and foremost a folk singer. The core of the music, at its essence, lies in his voice and guitar. His greatest talent lies in his ability to take simple, down-to-earth acoustic melodies and raise them aloft, endowing them with raw vitality and spirit.

As a consequence, Dikongué sounds his best when his melody and message occupy center stage, as they did on his outstanding 1995 debut, Wa, reissued in 1999 by Shanachie. Biso Nawa, his fourth release, is a return to form, and the additional instruments—guitars, bass, percussion, saxophones, piano, cello and voice—serve to reinforce the flow without getting in the way. Dikongué's deceptively simple and thought-provoking lyrics, usually in Dovuala, also appear in French and English in the liner notes. Curiously, he chooses to sing in accented Spanish on "El Tyrano," a somber meditation on the colonial experience.

The searching title track, a lament about love lost, starts the record with an overtly emotional emphasis and a relatively stripped-down sound. Echoes of Dikongué's years in South Africa briefly appear in the clicking introduction to the next track and the often lush vocal harmonies throughout. But Dikongué has crafted his own musical blend, incorporating elements of samba, jazz and other New World styles. Other than the unfortunate cliché rock guitar solo on the closing track, he keeps it fresh.

Paradoxically, while his lyrics are often dark and serious, Dikongué's music tends to be uplifting. Part of that comes from the poetic quality of his delivery, part from the short and soaring phrases he employs, and part from the easygoing rhythms that underpin the whole recording. I guess there's no reason depth can't be catchy—that's exactly what's happening here. If only the hard truth felt this good more often.