By REX BUTTERS
September 4, 2005
Sign in to view read count 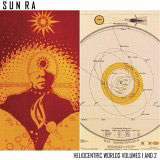 ESP's reissue series matches two classics on one disc, Sun Ra's Heliocentric Worlds, Vol. 1 & 2. These two 1965 sessions feature the Arkestra playing out, but mostly in small units, and rarely with the quirky humor often in evidence on Ra recordings. This space seems more intimate and introspective than some other galactic narratives in the discography. While the music here sounded like incomprehensible free jazz to critics living in the age of the Beatles and Herman's Hermits, Ra probably composed more of this material than he received credit for originally.

Shuffling keys on acoustic piano, Ra surprises with simultaneous runs on an electric keyboard on "Other Worlds. The blistering pace he powers gives John Gilmore a good blow, before Ra returns for more two keyboard fun. Boykins plays counterpoint, then joined in a round with Gilmore and Ra's electric celeste on "The Cosmos. Johnson's cymbal work keeps the stars shining. A dreamy solo by Ra leads to worried blues by Boykins, back to Ra rocking on piano. Danny Davis' flute briefly flies out of the bass bias on "Of Heavenly things, although Boykins and the bass marimba clock most of the track. A wonderful solo by Ra, "Nebulae features the electric celeste. The short "Dancing in the Sun lets Gilmore and Allen lead the band in some sideways bebop.

Although the sound has improved on this release, a blunt murkiness remains. A Vol 3 of previously unreleased sessions has also been recently issued.

Heliocentric; Outer Nothingness; Other Worlds; The Cosmos; Of Heavenly Things; Nebulae; Dancing in the Sun; A Sun Myth; A House of Beauty; Cosmic Chaos.