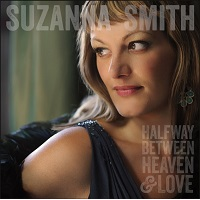 Oakland-based vocalist Suzanna Smith states that she is, ..." always looking for ways to play within the boundaries of a song's 'container,...' I think of songs as rooms and the longer you live in them, the more you can move about without bumping into things. I love when I reach that point with a song." She illustrates this aurally in her carefully considered standards like Legrand and Bergman's "Summer Me, Winter Me," King, Young, and Van Alstyne's "Beautiful Love," and Schwartz and Dietz's "Alone Together."

Smith joins Dorian Devins ( The Procrastinator (Self Produced, 2013)) as a new generation of lyricists penning words to jazz standards. Smith opens Halfway Between Heaven & Love with a mash-up of Tadd Dameron's "Ladybird" with Miles Davis' "Half Nelson," while closing with a warm and breezy interpretation of Dexter Gordon's "Soy Califa," replete with tenor saxophone accompaniment by Michael O'Neill, spinning LTD lines in the sand.

Smith, with Coleman, prove the composing juggernaut, producing music with a slight sepia tone ("Comet") and a winsome sense of humor ("Monk's Make Belief"). The original compositions meld well stylistically with the well-chosen standards and the original adaptations. Halfway Between Heaven & Love is a strong debut by an artist who is more than ready to come forward and be recognised.

Ladybird/Half Nelson; Paper Boat; Summer Me, Winter Me; The Man That Broke The Dragon’s Heart; Beautiful Love; Planes and Trains; Can You Give It Up; Comet; Monk’s Make Believe; I Would Give Anything; Hooray For Love; Alone Together; Soy Califa.