By MARK SULLIVAN
April 2, 2016
Sign in to view read count 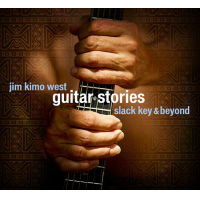 Guitar Stories presents a lovely, diverse collection of music centered around Kimo West's composing and excellent guitar playing. West is a proponent of the Hawaiian slack key guitar style, a fingerstyle playing technique using various open tunings. He credits the name of the tuning used on each track, as well as including a list spelling out the full guitar tuning for each.

So it's appropriate that the album opens with "Na Koa Moku O Keawe," a baritone guitar solo piece dedicated to the koa tree, a tone wood often used to build guitars. The compositions also embrace many styles beyond Hawaiian music. "El Álcåzar" (which refers to a regal building in southern Spain) is Middle Eastern, aided by percussionist Jamie Papish and violinist Ben Powell; "Daydream At Jumbo Rocks" has a distinct C&W flavor, courtesy of Marty Rifkin's lap steel guitar; and "'Iolani Palace Waltz" (a stately waltz that takes its name from a royal Hawaiian residence) sounds like chamber music, with West's acoustic guitar accompanied by a string trio and a flute.

There's lots to like here for fingerstyle guitar fans and World Music fans alike. This is warm music, pretty without being cloying. West—who also composes and produces for film and television—is equally adept at composition and guitar playing. It almost seems superfluous to mention his day job: he has been guitarist for musical satirist "Weird Al" Yankovic since the beginning of Yankovic's career.