Deborah Shulman & The Ted Howe Trio: Get Your Kicks: The Music and Lyrics of Bobby Troup 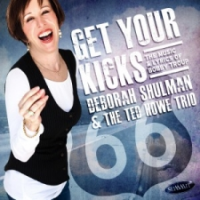 Songwriter Bobby Troup was a master at composing conversational lyrics, and vocalist Deborah Shulman is a master at interpreting such lyrics. That the two come together on Get Your Kicks: The Music and Lyrics of Bobby Troup should be no surprise; also, it is about time that Troup received an homage treatment like this. His lyrics were always 1950s chic, written in a day before political correctness ended the evolution and expansion of the Great American Songbook. What Shulman does is bring an honest understanding of both a music and its period of popularity.

Ted Howe joins Shulman again after their collaboration with trombonist Larry Zalkind on Lost In The Stars: The Music Of Bernstein, Weill & Sondheim (Summit, 2012). Here, leading his trio, Howe's approach to arrangement is striking and illustrated in the rather dark "Route 66" and pathologically forlorn "Nice Girls Don't Stay For Breakfast." In Shulman's hands these are ballads of experience—too much, in fact, rather than a blushing socialite after an evening tryst.

One of Troup's most striking and controversial songs, "Girl Talk" is give a golden treatment, with Shulman navigating the period's sexism and making the song more ironic than a 1950s vision of women in the Eisenhower era. Get Your Kicks: The Music and Lyrics of Bobby Troup is a wholly conceived project by two masters at the top of their respective games.

You're Lookin' At Me; Route 66; Nice Girls Don't Stay For Breakfast; Daddy; Baby All The Time; Girl Talk; Lemon Twist; February Brings The Rain; The Three Bears; It Happened Once Before; Meaning Of The Blues.