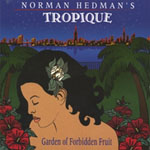 Five summers ago I went to a local park concert that advertised a Latin jazz band. When the music started I was quite surprised to find that it was a reasonable facsimile of the Cal Tjader/Mongo Santamaria combo of the late '50s. That was my first experience with Norman Hedman's Tropique. The group that night, specifically Hedman's conga work, the musician on timbales and the Afro-Cuban vibes of A.J.Mantas were the core of the music and I have seen them four times since.

Norman Hedman is one of those ubiquitous musicians who has seemingly played with everyone. Having worked with Latin jazz legends as well as performing on R&B and hip hop recordings over the decades has left the conguero with a world of experience but very little public acknowledgement. West Indian-born, Hedman was a graduate of Brooklyn's Wingate High School and then Brooklyn College. As a young man he got out to the clubs to see the jazzmen that he would later perform with. Working with such percussion luminaries of the '60s as Olatunji and Chief Bey, he left Latin jazz on several occasions for more lucrative experiences serving as Jean Carne's musical director for four years in the '70s and then with The Main Ingredient ("Everybody Plays the Fool") for three years.

Tropique has been an entity for the past twelve years and has evolved as a cooperative with an ever-changing list of personnel. Vibraphonist Mantas appears to have departed, although his one appearance on this album ("Island Spice") is clearly the best Afro-Cuban tune on the album. Alexei Tisganov plays vibes on the other tracks and the result is clearly less Latin jazz. I once saw Bryan Carrott sit in on vibes as a last minute replacement and, while his four mallet work is always impressive, he was the wrong man for this job.

The collective personnel of Tropique seem to reflect Hedman's pan-universal approach, bringing in R&B vocalists James "D Train" Williams, Ada Dyer, Kendra Shank and Dani Stevenson. Craig Rivers remains as the flutist who adds much to the Afro-Cuban aspect of the group, and one of the finest timbales players in the New York area, Willie Martinez, brings the heat (a la Willie Bobo) to his drum set. Misha Tisganov has been the consistent pianist over the past few years.

This is the sixth album recorded by Tropique but it has been six years since its last one. The dozen tunes are almost all Hedman originals, with two co-written with Williams, one from pianist Tisganov, and one from Martinez. "Rundadar Dance" leads, off done in a straight-up Afro-Cuban style. "Closer" is also up-tempo, but comes with an Ada Dyer vocal that is influenced more by R&B jazz. "Cutting Loose" is a mid-tempo riff propelled by Hedman's conga, River's flute and Sam Furnace's alto sax. The pace continues with that sort of pattern, (Afro-Cuban, R&B vocal, mid-tempo groove), with the exception of the attractive bolero, "Wait & See."

Track Listing: Rundadar Dance; Closer; Cutting Loose; Angel Of The Night; Because I Can; Garden of Forbidden Fruit; It's Just Not the Same; Wherever U R; Walk In the Moonlight; Feeling My Way; Wait & See; Island Spice.