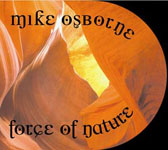 Late English alto saxophonist Mike Osborne, whose work represented the pinnacle of British avant jazz, sadly retired back in 1982 as a result of mental health problems. The discovery of previously unheard material is therefore particularly exciting, especially when its standard is high enough to preserve the reedman's best playing form.

This disc features live recordings of two different quartet lineups, both of them having Osborne teamed with trumpeter Dave Holdsworth. The opener, "Ducking & Diving," sprawls over an epic 42 minutes, from a performance at the 1980 Kolner Jazzhaus Festival in Germany. Osborne doesn't tarry, charging off into an exhaustive solo virtually straight away, with bassist Marcio Mattos kind of soloing too, maintaining a pulsing miasma alongside drummer Brian Abrahams. Then Holdsworth spurts, making a complete shift closer to something approaching the jazz tradition. Abrahams develops a bouncing beat that's almost a jungle precursor, then all goes quiet midway, before some odd structures form, such as the brief stretch of rocking-out rhythm five minutes before the conclusion. Osborne and Holdsworth began building their close rapport while working together with Mike Westbrook in the early '60s, right at the beginning of their careers. The trumpeter remembered this Koln gig as a personal pinnacle, but until 2007 (the year of Osborne's demise) he hadn't realized that it had been recorded.

Despite Holdsworth's memories, the other two pieces, recorded in London a year later, are arguably even more gripping. Here, Tony Marsh is on drums and Paul Bridge plays bass, the latter thrusting with an electric hardness, well up in the mix. "Journey's End" (8 minutes) and "All Night Long" (12 minutes) are more compact, horns tussling simultaneously, with seething urgency. The quartet slams with punk urgency into the latter tune, hurtling through a twinned theme with not a second wasted. Osborne is tensed expression personified, while Holdsworth is jetting off competitive flares. These were the days and now there is some sort of partial memory at the fingertips.