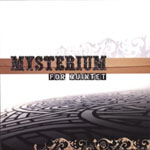 Improv jazz is, by nature, a creature best observed in its natural habitat: the live performance. This is especially true of groups who've been at it a while, as the interaction between players is half the fun. With a new group like Eric Eigner's Mysterium, it seems the opposite can be true. There's scarce onstage chemistry to be found, while a winsome new recording reveals greater studio possibilities.

Eigner is a young drummer who, like Federico Ughi, has carved out a peripheral spot for himself in the hard-to-crack New York improv scene by starting a project with the indefatigable polymath, Daniel Carter and issuing recordings on his own label. It's a strategy that, for both drummers, hasn't resulted in world fame, but keeps hope alive that improv may have a future yet. In both cases music well worth hearing has been put down on disc.

For the new quintet recording, Eigner has given Carter heavyweight company in trombonist Steve Swell and has played up well to the challenge of having these two powers in front of him. (It's one of Wittgenstein's mysteries why Swell is not more famous. Outside the improv scene he is routinely ignored in favor of vastly lesser talents. His basic form is monumental, but that's only the beginning. He has a range of extended techniques that puts almost all other players, on all instruments, to shame.)

Eigner's drumming often provides the foundation for most of the group forays into structured improv and he chimes in fearlessly with wind-powered toys here and there for fun. Swell also weighs in on Hammond organ (who knew?) and this gives the recording some welcome change in texture and rhythm. The two-disc recording quality is superb and the long session has been gracefully edited into bite-size pieces on disc one, with a lengthy piece devoted to disc two.

At the Bowery Poetry Club on Dec. 10th, the studio magic was harder to summon. Swell's superb-ness was too often drowned out. Carter finagled with the sound man then left early to catch another gig. Selinger's cello was too harshly amplified. Eigner, sitting in darkness towards the backstage, never seemed to make a strong connection with the others. Carter had his say, as always, and Selinger was most adept at linking up with his phrases, but this group needs more live playing time to develop a coherent, more interactive method of making group-improvised music.

CD1: Top-Dog-ucky Is A Long Shot; Lit Up Red At Night; Cockatoo; Dancing The Galliard; Regarding The Thinking Of Stones; Who Threw The Blame?; Tousled Heads; Rope-A-Dope; Or Just A Patchwork Quilt; CD2: Tomorrow Is A Long Today.