By CLIFFORD ALLEN
October 5, 2004
Sign in to view read count 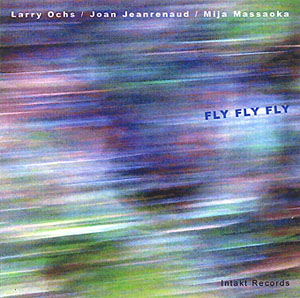 Culled from the ranks of the Rova Saxophone Quartet, the Kronos Quartet and the ever-increasing pool of improvising koto players, the trio of tenor saxophonist Larry Ochs, cellist Joan Jeanrenaud and kotoist Miya Masaoka is a formidable ensemble in the annals of creative "chamber" music. The group's formation was, in fact, a natural progression of Maybe Monday (Ochs, Masaoka and guitarist Fred Frith) and Ochs' own work with Jeanrenaud, who found herself in the improvising world shortly after leaving Kronos four years ago.

Initially assembled for a concert performance in 2000, the thrust of the group is to create a situation of creative composition—a blurring of the lines between notated (graphically and otherwise) and purely collectively improvised music. Between the instrumentation and the sonic concepts themselves, a truly unique trio has come into its own.

Without percussion as an engine, the musicians' efforts become the realm of sonic exploration, sinewy tenor lines meeting long arco lines and harp-like koto plucks on the opening "Fly Fly Fly," a sparse engagement of gauzy plateaus as arresting an opener as any blowout. Rova never was a "blowout" band, no matter how intensely free its collective improvisations could get, so it is no surprise that Ochs' new trio finds intensity in other realms. The steadily rising koto strums over interlocking drones of cello and tenor at the sixth minute of "Mystery Street," for example—this piece is one of the most varied explorations on the disc. Starting out as a noir-ish but playful romp, it segues into passages of ponticello and bowed koto or, alternately, filmic pastorals. Without being overly imagistic, Ochs as a composer certainly has a flair for that filmic quality and this is not necessarily a bad thing: a shadowy Eastern European folk theme can turn into tight flutters of sopranino and koto at what seems like the drop of a hat.

Yet surprisingly, in an age when the sounds one least expects from an instrument are, basically, what one can expect, the koto, cello and saxophones in many ways retain their traditional sonorities. There are certainly scrapes, rustles and squawks, but the modus operandi seems to be utilizing the instruments' standard ranges in non-traditional ways. In other words, interaction makes traditional sonorities non-traditional. Of course, in more subtle collective music such as this, such results are ideal.

Larry Ochs' non-Rova project is an extraordinary and unique extension of the compositional and improvisational aims set up in the saxophone quartet, and hearing them in this context affirms the stature of Rova and Ochs in the annals of compositional creative music. One can only hope that this valuable ensemble continues to find new ways to bridge these gaps.