By CELESTE SUNDERLAND
November 4, 2006
Sign in to view read count 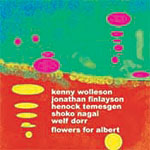 In 1905 Albert Einstein published three monumental papers. His theory on Brownian motion showed that minute particles in liquid move randomly; the photoelectric effect said that light can exist as either a wave or a particle; and special relativity states that the speed of light is constant, regardless of the observer's velocity.

A hundred years later the United Nations declared 2005 the World Year of Physics and German-born alto saxophonist Welf Dorr played "Flowers For Albert, a play on the title of David Murray's 1976 Hatology tribute to Albert Ayler, at the German House in New York. That night Dorr's piece honored the great German physicist while perhaps subtly hinting at the other great Albert.

The group immediately dons a vibrant conviviality on the title track. Wollesen sets up a fresh, free atmosphere with a quick, breezy drum solo before Finlayson's steady trumpet line picks up the pace, prepping the space for Dorr to take charge on saxophone. Airy cymbals and piano add lightness to the long, deep sax tones, and soon all partake in the communal activities, conceding to each other in a space devoid of doubt. Soon the sound breaks down to elemental structures. Particles of plucking noise team with silent voracity. The piece builds again to catchy, horn-led melodies then echoes away with shards of trumpet and quivering drums.

Finlayson breaks out a swinging lyricism on "Outcry, held brightly aloft by the vivacious rhythm section. Fantastic solos spring up throughout the track. Nagai's spirited convolutions around the keys evolve into extreme counterpoint as her left hand takes on brooding chords that dissolve into a liquidy marsh of spooky bass notes, which in turn evaporate in the end into Wollesen's diligent drum solo. His progression follows the natural flow of motion created as the drums crash then fade, or beat after one another, barely leaving room between without treading on the next.

"Just 4 Us features a scrupulous bass solo by Temesgen. He scurries around the neck of his instrument, teetering serendipitously upon key notes before idling away. Dorr plays flute on several tunes, adding a soft tone to the album with tracks like "Deep In. His compositions are rich in substance, introducing new textures into traditional constructs. The last track, "Swept Away, mixes free jazz with the big brassy sounds of a big band, incorporating a contrapuntal nature that mimics the combination of careful symmetry and natural chaos that is science.