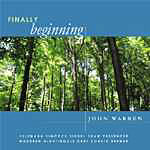 John Warren is a veteran of the British jazz scene having turned in work with baritone saxophonist John Surman over the decades. He's here exclusively as a composer and arranger and responsible for the entire program of music, apart from a reading of Thelonious Monk's "Ruby My Dear" which falls right in with the overall ethos, even as it retains its individuality.

Warren is fortunate indeed in having been able to assemble a crack band to give life to his music. In that regard at least this nine, and sometimes ten-piece band, wants for nothing despite the many facets of Warren's music.

"Winter Solstice" makes this point in no uncertain terms and does so despite the piece's essential elegance. It's melancholy too, and that aspect is teased out via Gwilym Simcock's piano—he manages to catch the mood without evoking the spirit of Bill Evans which is a considerable trick—and Martin Shaw on flugelhorn. Christian Brewer's alto sax brings some heat in the midst of this winter, but the balance struck is still a fine one.

The cover of Thelonious Monk's "Ruby My Dear" is graced again by Brewer, though this time he's in more reflective mode. Warren's arrangement is winningly deft in the way he hews closely to the composer's spirit even while his own is all over the piece. It exemplifies also how skilled he is at judging the weight of the ensemble, an aspect of his work which in a sense echoes Gerry Mulligan's work, though again of course the comparison serves only to contextualise Warren's work.

The very sparseness of "Willow White" does the same, the melody 'sung' in apt fashion by trombonist Mark Nightingale. His solo is an urbane affair that retains just enough of the trenchant to keep it from mere elegance, whilst drummer James Maddren comes into his own in accompaniment.

The absence of soloists on the closing "Kronk" has the effect of highlighting Warren's writing and in this instance, as in others, it turns out to be a model of economy. The music has room to manoeuvre and the impressionistic turns of bass, drums and vibes in particular make for some of the most distinctive music in a program that exudes both class and character in equal measure.