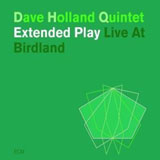 This group just doesn't put out a bad record, so it's hard to look at something new without some expectations. Bassist Dave Holland has led this particular quintet for six active years and four records, the latest of which is a live double set where the tunes stretch out around 12 minutes each. One would think this wasn't the best marketing move—aren't double live sets reserved for aging rock stars?—but then again Holland has been given the nod by the Grammy people. You take home the G, you get to do what you want.

In this particular case the secret seems to be unleashing the talent in his fellow band members, who in this combination are pretty much better than they are elsewhere. You can explain that however you like, but the combined energy has a very particular focus. Drummer Billy Kilson rides on, around, and under the beat in an actively propulsive mode, as much groove as swing. His fellow percussionist of sorts comes in the form of vibraphonist Steve Nelson, whose giddy sense of melody is evenly matched with an oblique rhythmic thrust. The horns pick up themes and twist them out, traveling to the borders of outer sound (where some tame listeners might cringe) on occasion.

Suitably enough, the first disc gets off the ground with "The Balance," which opened the quintet's debut, Points of View. It's an extended 22 minute romp over a relaxed but still forward-looking groove, Holland milking the areas between downbeat and backbeat to produce something that's familiar and yet strange at the same time.

Chris Potter's "High Wire" is more compact in mood and pace, at times losing the warmth that's the hallmark of this group. That's a temporary state, most certainly far from sight by the time the dreamy "Make Believe" comes through. "Claressence" (a Holland tune from before the quintet's time) moves gently and firmly through periods of free improvisation. "Bedouin Trail" winks slyly with a grin, winding along without a care in the world.

As always, that particular bouncing sense of joy shines radiantly through the music. This long recording from four days in November of 2001 presents a singular opportunity to hear what happens when this group stretches out. It's coherent but never predictable, right where you can't pin it down.