By NICK CATALANO
July 4, 2007
Sign in to view read count
Often, in my past columns there have been many essays and references to jazz musicians, recordings and scenes outside the United States. I have written a great deal in an attempt to address the mystery of the enormous popularity of the music across the seas versus its ironic unpopularity in many places in America.

Acknowledgment of this phenomenon has come in reviews of concerts, composers, writers, record producers and just about anybody connected with the transformation of jazz into world music. Recently, I spent time in Greece with Makis Morakis—an outstanding jazz writer, producer and scholar. As a result of this visit, another chapter can be added to my already bulging European jazz diary.

Makis is a successful artist and teacher who lives in Mykonos and has collected about 4000 CD's. He produces a blog each month and organizes jazz activity in Greece. He is emblematic of countless of Europeans whose jazz reverence approaches a Tristano-like asceticism. In his view, the art form is so special that it dominates all other musics in his cosmos. One afternoon Makis invited me over to his studio and we talked jazz for hours and wound up having a marathon listening/talking session. Such leisurely hangs are disappearing from my New York life style but in the bohemian art world of Mykonos they occur with joyful regularity.

We listened to a lot of bop and neo-bop sides led by the usual suspects but as time wore on Makis brought out some stuff that was unique because the performers would head just about any list of jazz fan trivia. Dupree Bolton, a multi-noted trumpeter on Harold Land's notable issue "The Fox and sideman on Curtis Amy's "Catanga was first up. The album was recorded after Clifford Brown's death and reveals Land's continuing search to replicate the trumpet/tenor sound of the Brown-Roach days. We listened to Bruce Escovitz, a dazzling tenor west coast tenor improviser and Sonny Rollins idolator who had recorded an album on the Koch label that was a tribute to "Newk —a nickname given to Rollins during the 50's noting his resemblance to Brooklyn Dodger pitcher Don Newcombe. For the first time ever, I heard Rocky Boyd a saxophonist who performed with Kenny Dorham on the album "Ease It. Other names—Cal Massey, Gianni Basso—appeared from Makis's archives as I sat and marveled at the scope of jazz history that was emanating from the tiny island of Mykonos. The aforementioned esoteric names reminded me of an alto player in Philadelphia during the 50's named Ziggy Vines. Billy Root once hailed Vines as "one of the greatest players who ever lived and a figure constantly sought out by Charlie Parker. Makis and I talked for hours about these wonderful musicians who were all virtually unknown and how various "complete anthologies of jazz history have failed to record their feats. 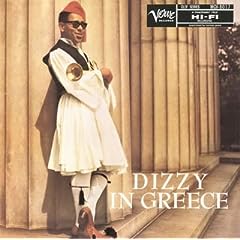 The nostalgic session reached its apotheosis when Makis brought out an album recorded live in 1956—Dizzy In Greece issued on Verve records. This album followed on the heels of Dizzy Gillespie-World Statesman which, according to eminent jazz writer Marshall Stearns, commemorated the very "first State Department tour in jazz history. I told Makis that I had written quite a lot about Dizzy lately and had misdated the time of his initial incursion into Cuba. We both searched wildly in the liner notes to "Dizzy In Greece to try to trace The legendary bopper's travel during this period. It seems this "first tour covered many places in the Middle East including Abadan, Dacca and Ankara where Dizzy's band members chipped in to buy a present for Muvvak Falav—Turkey's leading trumpeter.

Greeks had been rioting in Athens in May 1956, protesting America's resolve to support the British in the struggle for Cyprus. Newspapers were asking why America was sending jazz bands to Greece instead of guns. Dizzy's opening concert was staged for the same students who had just thrown rocks at the windows of the U.S. Information Service. Tension was high as the band started to play and students jeered. Quickly, an ominous silence fell. And then... as the band roared and swung, the jeers turned to cheers and the riot had turned to roaring approval with hats, jackets and other apparel thrown to the ceiling. The crowd was so taken that they carried Dizzy out on their shoulders stalling traffic in the center of Athens. I told Makis that maybe the State Department should re-send jazz to the area because the present foreign policy surely wasn't gaining any friends for America these days.

Dizzy In Greece features compositions, arrangements and performances by jazz immortals. Writings from the pens of Quincy Jones, Ernie Wilkins, Tadd Dameron, Benny Golson and Chano Pozo are included. Great musicians abound: Phil Woods, Charlie Persip, Billy Mitchell, Walter Davis and the venerable Melba Liston. It is truly an album for the ages and, fittingly, I was able to listen to it and talk about it with a formidable European jazz fan.