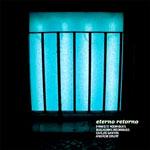 Creative Sources is a Portuguese label largely devoted to free improvisation. Over the past decade it has released over 150 CDs, making it one of the most active labels devoted to a demanding genre. Founded by violist Ernesto Rodrigues, the label frequently documents his work, along with his regular musical partners. Eterno Retorno, recorded in Lisbon in 2007, presents a quartet with Rodrigues and two frequent collaborators—his son, cellist Guilherme Rodrigues, and electronic musician Carlos Santos, along with Brooklyn-based percussionist Andrew Drury. Drury has worked across a spectrum of avant-jazz, free improvisation and environmental and community music projects, but it's still remarkable to hear how effectively he matches up with three musicians already closely attuned to one another's processes.

The music is insistently freely improvised, form not a given but belonging instead to the ultimate realization. Close listening will usually prove sufficient to separate individual sound sources, but there are moments when the expanded vocabularies of the acoustic instruments will cross into the realm of Santos' electronics. There's a certain assumption that much improvised music sounds and operates in the same way, but this quartet suggests something almost diametrically opposed. Each genuine encounter provides an opportunity to listen in a new way. The four musicians work through dynamics of familiarity and difference, each testing known relationships between sounds and patterns with new elements. While each of the four will sometimes focus determinedly on a particular element, there is rarely any effort to mimic or accompany another.

Without imitation of parts or conventional concordance of harmony or rhythm, the closeness consists instead of a certain working through of relationships between both space and density, which exist here on a scale that can suggest very large traditional orchestras. Moments of convergence between strings and percussion suggest both close relationship and tremendous space, enough space to allow the parts to coexist and interact without establishing a traditionally coded musical language. The animated electronics and percussion at the conclusion of "Adamant Distances" are genuinely exciting, a highlight of music that is an adventure for the musicians and listeners alike.