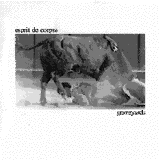 Graveyards is a collaborative effort featuring John Olson (of noise group Wolf Eyes) on electronics, saxophone and bass clarinet, Ben Hall on percussion and electronics and Hans Buetow on cello, engaging in a new kind of free improvisation. Although the groupâ????s sound may hint at times to both the most extreme ends of jazz improvisation (the Anthony Braxton/Richard Teitelbaum duets come to mind) as well as those of noise, Graveyards combines its sound into something different, a new and fertile ground for collective musical endeavor.

On Esprit de Corpse, the groupâ????s eighth release on Hallâ????s own Brokenresearch label, the triumvirate plays its usual brand of slow, brewing music. The space around the notes is just as important as the notes themselves here. The group never rushes into things, opening the first of four untitled tracks with an eerie, high-pitched electronic tone riding over a lower repetitively undulating one that could well be Olsonâ????s saxophone, Buetowâ????s cello, or even another electronic device—the difficulty in distinguishing one instrument from the rest only adds to the alien nature of this music. Slowly building as hisses, drones, and the odd assortment of notes see in and out of the mix (one second what sounds like cicadas, the next a washboard played by a hacksaw) this is hesitantly hostile music that the musicians even seem to be hesitantly inching themselves around. It feels to be unfamiliar ground for all involved.

Yet this is not music without precedent. When the smoke clears, Buetowâ????s cello comes forward, slyly at first before gaining confidence, and all the while Hallâ????s free tapping accentuates and drives the direction of the piece towards the ether. The electronic sounds become less ephemeral, safer. When Olsonâ????s bass clarinet enters, the piece even approaches a sluggish eloquence that Morton Feldman would be familiar with.

The next track opens with Hallâ????s percussion minimally accompanying Buetowâ????s cello. Its measured and seductive loneliness encompasses the piece, and Olsonâ????s choice of bass clarinet over his usual saxophone again adds to this. Indeed, the group has mastered their own breed of both speed and tone, resisting playing too much or too fast, as if each musician is wondering, between every note, whether there is reason to play again.

It is an approach that is not all new, of course. The Art Ensemble of Chicago, and especially Air, utilized it over thirty years ago. Graveyards have simply merged their philosophy with those of noise mongers like Einsturzende Neubauten and classical minimalists like the aforementioned Feldman. And while the strangeness of their work is of an isolated and cold nature, warmth can be found in the proximity of these wonderfully careful musicians as they attempt to maneuver their way into, and hopefully out of, the darkest corners of the mind. Of course most of the time, they seem content to leave you right where you are, alone and deserted. They worked hard to get you there after all.