By JIM SANTELLA
November 11, 2008
Sign in to view read count 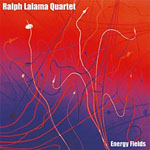 An exciting band with a firm melodic grasp, Ralph Lalama's quartet pours over musical themes with emphasis, as accents fall into place with angular motion and improvised forays push forcefully. The leader's suave tenor, John Hart's sultry guitar, Rick Petrone's driving acoustic bass and drummer Joe Corsello's rhythmic thunder combine gracefully to shape each tone poem with a lyrical message. With "Indian Summer," "Blackberry Winter," "Old Folks" and "Like Someone in Love," for example, Lalama and Hart apply vocal-like phrasing that settles in comfortably. Although it's interpreted at a quick tempo, "Just in Time" comes with a similar impression that relies on melody for its foundation. Even Corsello's extended drum solo rises and falls with the punctuation of a lyric that is felt but not spoken.

Faster pieces such as Charlie Parker's "Buzzy" and Wayne Shorter's "United" allow the quartet room to get pumped. Here, Lalama and Hart form muscular phrases and drive the unit emphatically. Improvised madness reigns as each extends his performance beyond melodic interaction and on to creative frenzy. Well within jazz's mainstream, but feeling the freedom to turn random motion into sculpted art, Lalama and Hart light up with abandon. They push and they pull, while creating tension that later resolves with equitable harmony. The album's title draws attention to these areas where improvisation storms madly, but the unifying theme for Energy Fields remains rooted in the quartet's respect for an enjoyable melody.