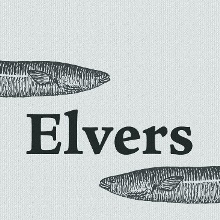 Formed in 2008, before becoming known as Elvers, this improv trio gigged for awhile as Watson, Marsh and May. Maybe because that sounded too much like a '70s prog-rock group, they searched for another name, rejecting entries such as Between Gnomes, Corpse Embers or Yobs Set Fire to Sheep, and deciding upon Elvers.

All three players have long experience on the London improvising scene. Trumpeter Ian R. Watson and bassist Peter Marshall played together in the sextet Lob, and regularly at Back in Your Town, curated by Ashley Wales. Watson moved onto the duo Treecreepers and Marsh to Moist. Drummer Paul May accompanied pianist Carolyn Hume and has been a member of the quartet Barkingside. Marsh and May also play together in Neptune is Mars.

Elvers is the first time all three have collaborated but, listening to the music they produce, that is never apparent. They sound as if they are on the same wavelength and in touch with each others' instincts and reactions—remarkable, as this debut album was recorded at only the trio's sixth meeting. The members say they came together out of a wish "to explore a shared interest in improvised music-making without making rules, particularly improv rules." The music reflects that wish: improvised with no trace of prearranged structures and with no one obviously leading the way.

Each of the three has his own distinctive style, but readily adapts to the playing of the other two—true to that desire not to make rules. So, when Marsh's bass gets into a groove and lays down a repeated bass line well into the lengthy "Sawtooth" (each track is titled after a type of eel, in keeping with the group's name), May and then Watson fall in with it as naturally as breathing. And when Marsh ceases to play the line, they revert to equal three-way playing as before. Simple: no rules, no dogma.

Crucially, that freedom extends to the absence of distinctions between soloist and rhythm section. Marsh and May occasionally act in tandem, but more frequently move along parallel tracks, not getting in each other's way, acting as much as soloists as rhythm players. Watson is a self-confessed searcher after melody, and his intermittent interjections—not solos, as such—reflect that search, always having a clear structure and melodic line.

Overall, the album reveals Elvers to have its own well-defined identity and sound, a happy amalgam of its three component parts, making it a group to watch.