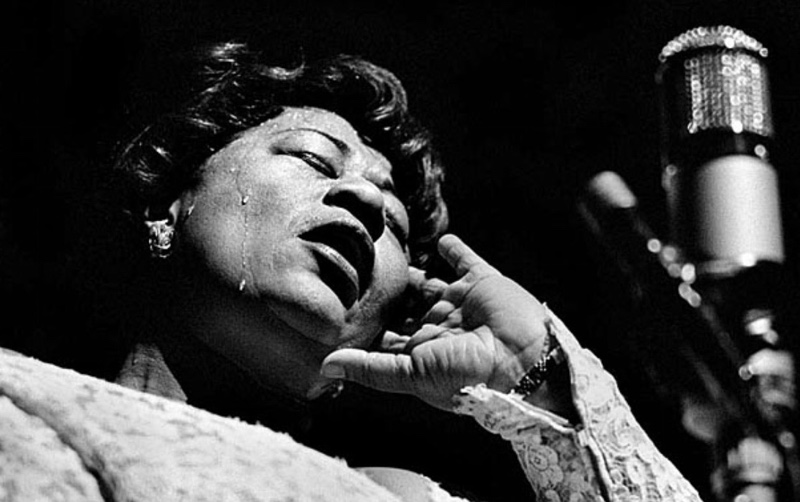 By MATHEW BAHL
October 15, 2015
Sign in to view read count
This article was first published in June 2004.

Considered by many to be the 20th century's greatest female singer of jazz and American popular song, Ella Fitzgerald (1917-1996) is one of the few singers whose work transcends generations and musical genres. Fortunately, over the course of a career that spanned six decades, "The First Lady of Song" amassed a nearly unrivaled discography. It is a testament to Fitzgerald's art and her place in popular culture that the vast majority of her recorded output is readily available on compact disc.

Fitzgerald's career can be divided into five periods. During her Big Band Years (1935-1941) , she sang with the Chick Webb Orchestra (renamed after Webb's death in 1939 as Ella Fitzgerald and Her Famous Orchestra). By the age of 20, Fitzgerald was the most popular female singer in America, and, in 1938, she wrote and sang one of the biggest hits of the entire decade, "A Tisket, A Tasket." Her Decca Records Solo Years (1941-1955) were a mix of groundbreaking scat recordings, classy pop records, and trite novelty songs. By the early 1950s it became clear that Decca didn't know how best to utilize Fitzgerald's talents. Norman Granz, founder of Jazz at the Philharmonic and Ella's manager, formed Verve Records in no small part as a vehicle for Fitzgerald.

Her Verve Years (1956-1966) marked Fitzgerald's transition from singing star to cultural icon. Working at the absolute peak of her powers, Fitzgerald recorded a stunning collection of live and studio albums including her legendary Song Book series. By the mid-1960s, Fitzgerald found herself unsure of how to cope with the folk/rock revolution. During these Transitional Years (1967-1973) , she drifted between record labels and made some questionable efforts at a more contemporary sound. Finally, in the early 1970s, Norman Granz formed Pablo Records. During her Pablo Years (1973-1989) , Ella returned to recording classic standards in the company of great jazz musicians. During the last fifteen years of her career, age and declining health slowly eroded Fitzgerald's remarkable vocal abilities.

With the endless compilations and bootleg albums floating around, navigating Fitzgerald's discography can be difficult. So consider this a road map to the very best work of the very best singer that jazz has ever produced.

Fitzgerald did more than any other singer to establish the live album as a viable commercial format. More importantly, her live recordings are the best place to hear Ella the improvising jazz artist at work. 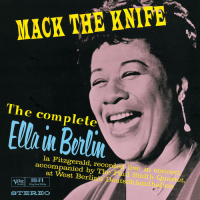 The Complete Ella in Berlin: Mack the Knife (1960)

Ella's most famous live album. While her unforgettable memory lapse on "Mack the Knife" remains a classic moment, the balance of the CD more than holds it own. Fitzgerald propels the swingers forward with irresistible force and caresses several beautiful ballads with her inimitable voice. Capping off the evening: An improvisational tour de force on "How High the Moon."

The original LP culled songs from two concerts Ella gave on the French Riviera. For this expanded two-CD reissue, Verve has released both concerts in their entirety, creating an opportunity to compare and contrast Fitzgerald's work over two successive nights. The results are a reminder of Fitzgerald's fluid and improvisational live performances.

During the years before and after Verve Records, Norman Granz frequently recorded Fitzgerald live. He eventually released most of the material on his Pablo label in the 1970s and several of the sets were subsequently reissued on CD by Fantasy. This four-CD set brings most of that material together in one package, with concerts from 1953, '66, '67, '71, '72, '74, '75, '77, '79, and '83 that not only feature Fitzgerald with her current working groups (led by pianists Paul Smith and Tommy Flanagan) but also include live encounters with the Duke Ellington Orchestra, the Count Basie Orchestra and several all-star sessions.

Fitzgerald's "Song Book" series remains a landmark in American popular music. Along with Sinatra's contemporaneous work on Capitol, these albums redefined the finest work of Tin Pan Alley as an important cultural treasure. Backed by the best arrangers of the era, Fitzgerald paid tribute to Porter, Rodgers & Hart, Berlin, Ellington, the Gershwins, Arlen, Kern and Mercer, and, in the process, erected the de facto pantheon of classic American songwriters. 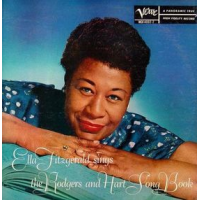 Conventional wisdom held that Fitzgerald was not a good choice to sing R&H because she couldn't mine the wit of Lorenz Hart's lyrics. Conventional wisdom must have wax in its ears. Fitzgerald doesn't sing Hart's lyrics with a wink and a nod in her voice—nor should she. Hart's words don't need theatrical embellishment, and thanks to the immaculate clarity of Fitzgerald's diction, it is possible to savor every clever turn of phrase. The few occasions where Fitzgerald doesn't do right by Hart's lyrics (i.e.,"Manhattan") are redeemed by her consistently glorious treatment of Rodgers' melodies.

The jazz roots of Ellington's songwriting make his body of work a particularly apt fit for Fitzgerald. She stretches out more on this material than on any of her other Song Book sessions, and the results are both sublime and swinging. The three-CD reissue is also an opportunity to compare Fitzgerald's work in a wide variety of instrumental settings, from the full might of the Ellington Orchestra all the way down to gorgeous duets with guitarist Barney Kessel.

A monumental achievement that finds Fitzgerald and Nelson Riddle, the greatest arranger of the era, tackling nearly the entire catalog of arguably America's premier songwriting team, George and Ira Gershwin. Ira's oft-repeated line serves as the best endorsement for these recordings: "I never knew how good our songs were until I heard Ella Fitzgerald sing them." Originally released as a five-LP set, the Verve Master Edition reissue contains four CDs including some previously unreleased bonus material.

In addition to the Song Book series, Fitzgerald also recorded numerous singles and albums in the company of a wide variety of top arrangers.

Fitzgerald recorded several wonderful albums with arranger Frank DeVol. Like Someone In Love reissues the contents of that LP along with material from the same sessions originally released on the LP Hello Love. Stan Getz makes an appearance, but the real attraction is Fitzgerald's glorious voice framed by DeVol's understated arrangements. 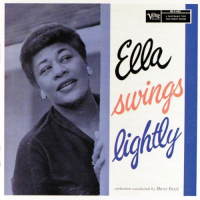 The standout of Fitzgerald's three collaborations with arranger Marty Paich and one of her most enjoyable studio recordings. Although most of the songs have associations with the big bands of the '30s and '40s, Paich's arrangements avoid presenting the material in a nostalgic vein. For her part, Fitzgerald tackles these Swing Era tunes with an authority and playfulness only hinted at during her own days as a big band singer.

Ella's non-Song Book collaborations with arranger Nelson Riddle reached their pinnacle with this album and its companion, Ella Swings Gently with Nelson. Swings Brightly is an energetic, up-tempo affair highlighted by extraordinary renditions of "Don't Be That Way" and "I Won't Dance."

Ella sang with nearly every type of instrumental configuration from large string orchestras to big bands to combos to small groups, all filled with the finest jazz and studio musicians available. However, these recordings prove that all she ever needed to create great music was her voice and a sympathetic accompanist. 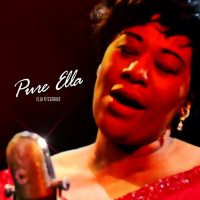 This CD reissues the two now-legendary voice and piano EP's Fitzgerald made with Ellis Larkins, Ella Sings Gershwin (1950) and Songs in a Mellow Mood (1954). These recordings are perhaps the most effective rebuttal to the charge that Fitzgerald did not care about the meaning of lyrics. "Someone to Watch Over Me" remains the only version of this extraordinary song that this world ever really needed.

These duets with pianist Paul Smith were originally released as Songs from Let No Man Write My Epitaph. Ironically, Fitzgerald's voice never sounded richer or more radiantly beautiful than on this collection of songs about loss, regret and revenge. Ella often cited "Angel Eyes" as one of her favorite songs, and she never sang it better than on this record.

During the last twenty years of her career, Fitzgerald performed countless duets with guitarist Joe Pass. Take Love Easy is probably the strongest of the four studio albums released by the pair. Fitzgerald sounds relaxed and confident, and Pass plays with deftness and sensitivity.

Although fans often lament the pairings that never happened (imagine what a duet album with Sarah Vaughan or Frank Sinatra might have yielded), Norman Granz ensured that Fitzgerald had the opportunity to work with some of her fellow jazz legends. 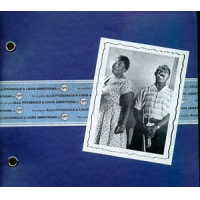 The Complete Ella Fitzgerald and Louis Armstrong on Verve (1956-1957)

This strangely packaged three-CD set collects the three memorable LPs that Ella and Pops recorded together for Verve along with bonus material. Oscar Peterson's quartet backed the singers on Ella and Louis and Ella and Louis Again , and Russ Garcia wrote the orchestral arrangements for Porgy and Bess , which is easily the best of the numerous two-singer jazz versions of this classic American opera.

The close rapport and deep personal friendship Fitzgerald and Basie shared always made their collaborations memorable occasions. Quincy Jones's arrangements aren't as sharply drawn as they should be, but Fitzgerald and Basie are in such good form that it doesn't really matter. Worth the price of admission just to hear Basie on organ trailing lovingly behind Fitzgerald on a gorgeous "Dream a Little Dream of Me."

A studio meeting between the First Lady and the Duke, the original LP featured all ballads on one side and all swingers on the other side. Although some of the up-tempo material is wonderful, the ballads, most notably "Something to Live For" and "A Flower Is A Lovesome Thing," are what make this an essential Fitzgerald item.

Although these recordings don't fall neatly into any of the above groupings, they remain a necessary part of any Ella Fitzgerald collection.

This nicely chosen compilation showcases some of Fitzgerald's best work for Decca Records during the pre-LP era. The chronological sequencing allows the listener to trace Fitzgerald's development and sample her earliest efforts at both vocal improvisation and sophisticated jazz-influenced pop singing. 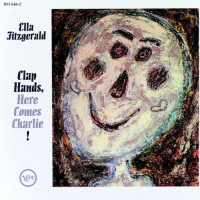 Although she toured the world with a jazz quartet, Fitzgerald rarely brought that format into the studio and given the results on display here, it is difficult to understand why. Part of the record's appeal no doubt rests with the rather offbeat-for-Fitzgerald song selection. An under-appreciated gem in the Fitzgerald catalog.

The idea was to put Ella in the studio with some of the best jazz musicians in the world (Tommy Flanagan, Ray Brown, Louie Bellson, Clark Terry, Zoot Sims, Lockjaw Davis and Sweets Edison) and turn them loose on a choice collection of standards. It turned out to be a pretty good idea. Fine and Mellow captures in the intimacy of a studio the kind of freewheeling improvisational performances that Ella usually reserved for the stage.