By EYAL HAREUVENI
August 10, 2012
Sign in to view read count 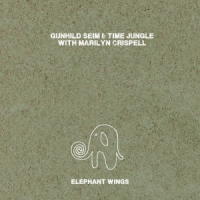 With Elephant Wings, Norwegian trumpeter Gunhild Seim grows the number of albums released, since beginning her career as bandleader of Time Jungle more than five years ago, to three, including 2007's Time Jungle and 209's Morpho, all released on her own Drollehålå imprint. Each has been a beautiful gem, demonstrating Seim's compositional skills to balance and contrast between a subtle, tender aesthetic with fierier and more intensive playing.

Elephant Wings is another excellent set of compositions, with Seim collaborating, this time, with renowned American pianist Marilyn Crispell, following a joint tour in Norway and Germany. Crispell plays here as an organic member of Seim's outfit, focusing on the pianist's unique and lyrical side.

With Crispell's support, Seim solidifies the folksy, songlike and storytelling qualities of her compositions. "Honu," "Joni," "Jambo" and "Song For Amelia" unfold beautifully as a rich and nuanced continuous mini-drama, characterized with coherent structure and a lasting, mysterious kind of emotional impact. "Elephant In The Room" is a truly magical composition, featuring a touching melody that each member of Time Jungle interprets gently, while Crispell repeats the theme. The close affinity between Seim and Crispell is best captured on the spare "Volcano Village," where both search for common melodic ground.

But Crispell, Seim and Time Jungle are also willing to experiment more with demanding, free improvised segments integrated within the looser dynamics of "Enough," "Moving Perspective" and "Manu." These impressive compositions demonstrate the opinionated playing and effortless trusting interplay of this longstanding quartet, with the wise support of Crispell.

The last composition, "Eyes No See," unites both attitudes. It is a restrained, lyrical composition that stresses abstract silence, space and time, thus creating an enigmatic atmosphere. An impressive way to conclude a highly creative and personal recording.