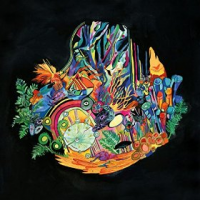 In trying to describe Kaitlyn Aurelia Smith's music it occurred to me that it sounds like music that would be made by computers if computers ever evolve to posses their own intelligence and emotions. But that doesn't quite hit it... perhaps a better way would be to say that it's some of the most organic electronic music I've ever heard, vibrant and full of life. In a recent interview, Smith describes the music made by some of her influences as "neo-futuristic vibes that still feel connected to nature and have a spiritual quality to them." I think, in the end, that sums up her own music quite well.

EARS is Smith's fifth album and sees her now as one of the forefront of electronic music composers. Using as her primary tool the Buchla 100 Music Easel synthesizer (all wires, connectors and lights, looking every bit as complex as the range of sounds it's capable of producing), Smith is joined by Rob Frye of Bitchin Bajas on woodwinds. The acoustic textures provided by Frye were composed by Smith, and she integrates and merges them into the panoply of the overall picture quite smoothly. It's the Buchla that takes center stage, however; a miraculously musical piece of machinery that, in Smith's hands, creates provocative soundscapes. Dense layers of sound interweave and wind among themselves but never lose each other, always in sync like some multicellular organism—alive yet synthetic.

Smith grew up on an island called Orcas off the coast of Washington, and the space and wildness there strongly influence her music. Tracks such as "Wetlands," "Arthropoda" and "Rare Things Grow" seem to incorporate field recordings—bird wings beating, water, wind, leaves rustling—but are assumedly generated by the Buchla. It's a testament to Smith's skill as a composer that these sounds evoking the natural world are immersed into the whole so seamlessly.

The 1984 Japanese animated futuristic eco movie Nausicaa of the Valley of the Wind was a big influence on the album, according to Smith. This may explain the almost Asian cadence her multi-tracked vocals have at times. EARS marks the first time she's used the human voice to such an extent, and she doesn't sing in a specific language, preferring to focus the listener's ears on the musicality of the human voice instead. The abstract vocals, as a result, help ground the album and help keep it connected to the human plane of experience.

The eight tracks on EARS soundtrack an aural journey which also generates an imagined visual journey, unique to each listener. It's a life-affirming and contemplative journey, which closes with the 11-minute "Existence in the Unfurling." Here, as on the rest of EARS for that matter, time seems to drift backward and forward, undulating through pulsing synth patterns and soothing washes of sound, words sung and chanted. Sometimes shadowy, sometimes sunlit. Always melodic, always adventurous.