Darby Dizard: Down For You 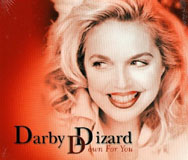 A first listen to Darby Dizard's debut, Down For You, will give you a sense of accomplishment from this California vocalist who relocated to Portland, Oregon and then pursued her muse to write and sing by attending Sarah Lawrence College in New York.

Dizard disarmingly presents her version of the Annie Ross lyric set to Art Farmer's "Farmer's Market" with both accuracy and a fine sense of swing. Dizard follows "Farmer's Market with the album's highlight—original lyrics set to trumpeter Johnny Carisi's "Israel, originally from Miles Davis' Birth of the Cool (Blue Note, 1949). The tunes works, with simple lyrics that display the period feel of the composition that Carisi brought to his late 1940s classic.

What follows in the set list is a mixed selection of mostly the familiar with tunes including the romantic "So Many Stars" from Sergio Mendes and Alan and Marilyn Bergman, the Burns/Herman "I Remember You" and Cole Porter's "Ridin' High."

There are a few other pleasures to be derived here, including a gorgeous balladic version of the Arlen/Mercer song, "This Time the Dream's On Me," a reading of the Ralph Burns/Woody Herman/Johnny Mercer "Early Autumn," a good interpretation of the Jon Hendricks lyrics for Monk's "In Walked Bud" and a revisit to Chick Corea's fusion-era "Five Hundred Miles High."

Speak Low; Farmer's Market; Israel; That Old Black Magic; 500 Miles High; So Many Stars; The Music Goes Round and Round/I Hear Music; This Can't Be Love; Down For You; Early Autumn; I Remember You; In Walked Bud; This Time the Dream's On Me; Ridin' High; Postlude.

Title: Down For You | Year Released: 2007 | Record Label: Self Produced