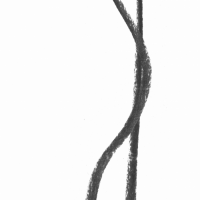 With improvising double bassists of the calibre of Olie Brice, John Edwards, Dominic Lash, David Leahy, Peter Marsh, Marcio Mattos, Jordan Muscatello and Guillaume Viltard being regulars on the London improv scene, it is not an easy place for young newcomers to make an impression and gain a reputation. But every once in a while, a new bassist comes along who impresses fellow bassists and other musicians equally. Tom Wheatley is the latest such player, having rapidly progressed from being a regular at Eddie Prevost's weekly improv workshop to be on a par with many in the list above. Along the way, Wheatley has started to put together an impressive discography that already includes two cassette/download albums, Yoke and Yoke II (Earshots, 2015 & 2016 respectively) of bass duos with Edwards. (See the YouTube clip for footage of the pair live together.)

Now comes Wheatley's self-produced album Double Bass, consisting exclusively of solo bass improvisations—surely the ultimate test of any improvising bassist's mettle ever since the first solo bass album, Barre Philips' Journal Violone (Opus One, 1969). Issued on vinyl LP, Wheatley's album consists of four tracks, titled after their locations on the record, a twenty-minute track occupying side A, and three shorter ones, totalling nineteen minutes, on the B side. The disc comes housed in a monochrome sleeve which, along with the record's labels, is illustrated with Wheatley's own appealing "schematic diagrams" showing parts of the bass.

Once the music begins, its most immediately striking features are the richness of the sounds that Wheatley extracts from his instrument and the sheer quality of the recordings of them, thanks to James Johnston who recorded and mixed the album. Throughout, one does not feel like an external spectator, more that one is situated inside the action, enveloped by the instrument and its rich sounds. Employing a combination of conventional and extended techniques, Wheatley forensically explores what his bass is capable of, extracting a broad range of sounds across the spectrum from the lowest, warm, resounding tones right up to far edgier, high frequency bowed sounds.

Wheatley strikes a near-ideal balance between repetition and variety. When he hits upon a particularly pleasing combination of sounds, he happily repeats them without overdoing it. His explorations do not include change for its own sake, so transitions are carefully handled and feel natural. The album clearly demonstrates that Wheatley deserves his burgeoning reputation and is on an upward trajectory.