By PHILLIP WOOLEVER
May 1, 2018
Sign in to view read count 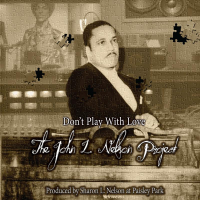 Playing a key role in creating a musician can mean just as much as creating music. In that regard, this is indeed an ironic title since strong emotional ties formed the beginning of both the song's origins and offspring.

During years around the 1950s, John L. Nelson performed traditional jazz songs he wrote under the nom' de plum Prince Rogers. Nelson later bestowed that sobriquet upon a son, who eventually went by only the surname and became one of the most recognized names in popular music.

The elder Nelson's name isn't remotely as recognizable as that of his prodigious offspring, who subsequently created one of the most popular catalogues in music history, but apparently the direction Prince chose in life was heavily influenced by his father.

According to Nelson's daughter Sharon, who produced the album, Prince's musical roots can be traced to these songs.

"Our dad composed many songs but they were never recorded until now," reflected Sharon, who brought the project to fruition through her Maken It Music Record Company. "He was Prince's musical inspiration."

Maybe the best assessment came from Prince himself, who reportedly reflected, "Our personalities are a lot alike but his music is like nothing I've ever heard before. It's more complex. He told me one time that he has dreams where he'd see a keyboard in front of his eyes and he'd see his hands on the keyboard and he'd hear a melody."

That praise is a bit overstated, but not really far off the mark. The album illustrates many blossoming branches on the Nelson family tree. Doves are not likely to cry from such a perch.

Sharon Nelson says the record came to light when she discovered sheet music while cleaning out cabinets at home. She enlisted cousin Louis Hayes who brought along an exceptional band, said to have recorded the tracks live, with little editing. Perhaps the project even offers a generous glimpse as to what might have been if Prince had focused on saxophone instead of guitar.

ADVERTISEMENT
There's an image of Prince on part of the album cover but it doesn't seem like any marketing ploy beyond the family connection. Musical aptitude and appreciation obviously ran deep in the family.

It figures that Nelson, who died in 2001, would have been quite proud of this package, which includes swing, samba and be-bop sounding fresh as a field of purple flowers in full bloom.

Vincent Herring's sax soars as a highlight of the title track, leading to some sparkling keys by Richard Germanson before Herring returns to ice the cake on this dreamy slice of ballroom delight.

Hayes and bassist Dezron Douglas maintain the highest standard of a rhythm section throughout, with Douglas adding a fine solo on "Darkness."

It's nice to imagine that Don't Play with Love will illuminate new, jazz-based history and horizons for a previously uninitiated group of listeners drawn by Prince's star power, but that notion isn't the most realistic when it involves an older genre.

In truth, there are other recent orchestral jazz releases just as worthy of a listen that will not get anywhere near The Nelson Project's publicity, a push due to promotional connections established by Prince's popular legacy.

That doesn't diminish the quality of the music. Maybe it's a benefit that comes from nurturing a future superstar.

Lucky Am I, Don't Play With Love, Runnin' Through My Mind, Darkness, Lonely, Heart of Mine, Step Back.

About The John L. Nelson Project