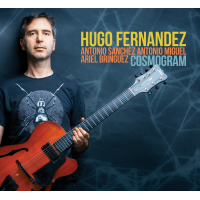 Of all the instruments in a group or orchestra, none has a broader or more variable sonic profile than the guitar. When it is played properly, with earnestness and sincerity, a guitar can move the listener to tears; when it is used, however, is to elicit sounds that are best described as disquieting and cacophonous, that is another matter entirely. Luckily, Mexican-born guitarist Hugo Fernandez treats the instrument with respect, showing its warmer and more pleasurable side on Cosmogram, a genial quartet date on which he shares the melodic lines with Cuban-bred saxophonist Ariel Bringuez .

Fernandez, who now lives in Madrid, Spain, after having studied at the Berklee School of Music and the University of New Orleans, composed each of the album's eight selections, and they are by and large likeable if otherwise unremarkable, the Latin influence ever-present but rarely conspicuous. Their underlying charm is amplified by Fernandez' smooth-flowing solos, Bringuez' assiduous work on tenor or soprano saxophone, and the group's world-class rhythm section: Spanish bassist Antonio Miguel and Mexican drummer Antonio Sanchez who wrote the score for this year's Academy Award-winning film, Birdman.

For a preview of what Fernandez and his colleagues have to offer, one need go no further than the cordial opener, "Reconciliacion," whose moderate tempo and emphatic rhythms provide a template for what is to follow. Bringuez plays tenor on "Reconciliacion," moves to soprano on the slow-moving "Metro" and shuffling "Sublime," and basically alternates thereafter. Fernandez adopts a more metallic stance on "Sublime," as he does later on "Bakio." The other numbers, each one engaging in its own way, are "Grounds," "Auras," "Un-Balanced" and "Yap."

Everyone is technically sound, while the music, contemporary in spirit yet traditional in form, glides evenly along without causing undue concern. Neither, on the other hand, is it likely to quicken one's pulse to the point of unease. It's simply tasteful music, quite well-played by Fernandez' able quartet. If you are partial to guitar, Cosmogram should present ample grounds for approval.