Katie Bull: Conversations with the Jokers 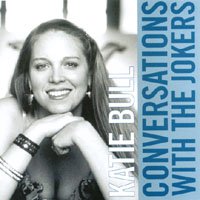 Female jazz vocalists are spoon-fed to the masses these days, made as accessible as possible with their approach and repertoire by, more often than not, big labels and mass marketing machines. If you ask most fans of jazz vocals, however, you'll gather there's a shortage of any memorable, or listenable, vocalists out there. Vocalists such as Sheila Jordan and Jeanne Lee brought interpretive and adventurous jazz vocals to the next level. Such flexible instruments are sorely lacking in our regurgitated times; they are of several who Katie Bull has used as the basis for her unique delivery and style.

Bull's newly released CD, Conversations with the Jokers, immediately qualifies her for that deserving-of-wider- recognition category (usually loosely handed out to those whose gift is questionable and popularity mystifying). Assembling the seemingly experimental rhythm section—though found here in a more straight-ahead approach—of Michael Jefry Stevens (piano), Joe Fonda (bass), and Lou Grassi (drums), Bull finds herself surrounded by a colorful session of solos and accompaniment throughout. The vocal-bass duets of the bluesy "See Through You" (surprisingly the sole original of the date) and "Like Someone in Love" especially stick out. (Bull rumors that her next project will actually be duets with Anthony Braxton's choice bassist from the '90s.)

Stevens, who has co-led a group with Fonda for many years, shines as well. His unaccompanied piano intro to "My Little Boat" only suggests the bossa nova theme while focusing on a spacious off-beat rhythmic pulse, before settling into the dense lyrics and Grassi's beat. And the drummer's extended unaccompanied brushes flutter like a butterfly kiss to open "You and The Night and the Music," with Bull's treatment recalling the New England-New Yorker Dominique Eade. Bull's scatting tendencies develop naturally when lyrics and words just don't seem enough to get the point across. Her natural swinging ability and risk taking make her a vocalist deserving a listen.

I Remeber You; My Little Boat; See Through You; Moonlight Becomes You; You and the Night and the Music; What is this Thing Called Love?; Wave; Now's the Time; I'm Glad there is You; You're Everything; Like Someone in Love.