By EDWARD BLANCO
December 4, 2008
Sign in to view read count 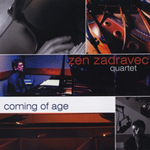 Once in a while you come across a young, new artist who presents an exciting new sound that few words one can say about the music seem inadequate. Such is the case with Canadian-born pianist Zen Zadravec, his quartet and this first effort.

Dedicated to the memory of his late mother Irene, Coming of Age is one of the most impressive debut recordings released this year. The music is vibrant, straight ahead jazz that offers eight fresh new compositions and a hard-driving couple of covers; the Burke/Van Heusen "Polka Dots and Moonbeams" and the Rodgers and Hart classic, "Have You Met Miss Jones," perhaps two of the best scores on this disk.

Zadravec's core quartet is comprised of Alex Hernandez on bass, Chris Brown on drums and the versatile Todd Bashore playing alto and soprano saxophones. He augments the personnel by bringing in bassist Kenny Davis (who subs on two pieces), trumpeter Derrick Gardener, trombonist Conrad Herwig and Anibal Rojas on tenor and soprano sax. The collaboration of additional players enhances the quality of the recording with superb results, producing the sounds of a light ensemble, as opposed to just a quartet.

Coming of Age starts out in blistering fashion with high-energy and intense "Quest for Truth," featuring Zadravec and Bashore on the alto lobbing broadsides at each other for one heck of an opening statement. Drummer Brown introduces the title track with some light taps on the sticks leading to a few high-pitch trumpet solos from Gardner, with the pianist playing the background until his chance for a run on the keys comes along—and what a nice run it is. Zadravec dedicates "Song for Christine" to his wife, a calmer piece of music that highlights the play of Gardner and Rojas on the tenor. Reflecting a somber more respectful tone, Zadravec penned the lovely soft ballad "In Memoriam" in homage to his late mother where the pianist plays with delicate, heartfelt emotion in what he states is "clearly one of the most beautiful compositions I have ever written."

The band turns to a bit of the hard bop stuff on the sizzling "Mr. DT," dedicated to teacher and good friend Don Thompson. This is one swinging piece of music, with solos from trombonist Herwig and Rojas on the tenor, as Zadravec runs his fingers all over the keys. Pianist Kenny Barron says of Zadravec: "His playing is muscular and filled with a sense of adventure. His writing is full of harmonic surprises and textures."

There's no question that Zen Zadravec comes of age on this impressive and compelling debut. The music you will encounter on Coming of Age reveals the remarkable talents of an artist whose performance and compositions have forged a gem of an album.

Quest For Truth; Coming of Age; Song for Christine; In Memoriam (in Loving Memory of Irene Zadravec); Mr. DT; We Miss You Mister Kirkland; Polka Dots and Moonbeams; Have You Met Miss Jones; Givin' It Up; In Memoriam (revisited).