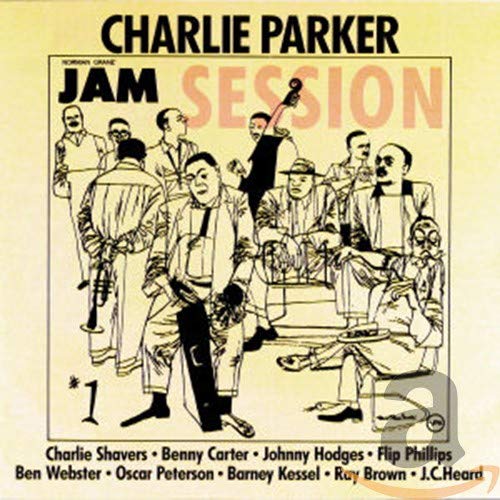 Charlie "Bird" Parker was a peerless musician who needs no further introduction. Despite his vast discography, there are few good-sounding recordings where the majority of the tunes run any more than 5 minutes in length. Jam Sessions is one of the notable exceptions. Backed by an all-star band (including such giants as Johnny Hodges, Ben Webster, Benny Carter, and Oscar Peterson), Parker stretches with leisurely exuberance across lengthy jams (every track is over 13 minutes). The assembled talent really come together and hit their stride on the album's two blues numbers. "Jam Blues" kicks off the record in an up-tempo, surging forward with one inspired solo after another, including a genius guitar solo by the great Barney Kessel, who swings with an almost rockabilly edge. Trumpeter Charlie Shavers and saxophonist Flip Phillips deserve much greater acknowledgment after their work on these sessions. "Funky Blues" is the closest we can come to actually seeing the Bird soar in an after-hours jam session. This easy-paced blues unfolds deliciously, with each solo building on top of the preceding one, as these musicians converge on the bluesy heart of their playing. Benny Carter's alto rarely sounded sweeter, and Ben Webster's breathy tenor deserves honors. The album's two ballads balance out the program, and are of fine quality, if not a little too pretty. But the real reason that you must hear this recording is to experience the swinging sensation of its soulful blues.