By ROBERT SPENCER
July 1, 2000
Sign in to view read count 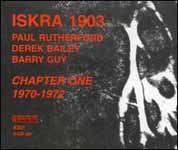 Iskra 1903, named after a newspaper founded by Lenin, has had several incarnations. This one, as befits a disc entitled Chapter One, was the first: Paul Rutherford (trombone and piano), Derek Bailey (guitar), and Barry Guy (double bass). The first revelation is that Rutherford plays piano, and that he's a worthwhile improviser on that instrument. The second is that this music, for all its uncompromisingly unpremeditated and atonal character, contains a great deal that beguiles and fascinates.

This massive 3-disc set contains music from a September 2, 1970 concert, a May 3, 1972 recording session, a 1971 session, and three fall 1972 German tour dates. The first disc, containing the 1970 concert, features Rutherford on piano on three tracks only. He is a spacy, searching pianist—in his laconic use of space, he's rather like a Herbie Hancock of free playing. Perhaps because of the nature of the instrument, the piano tends to anchor the music and suggest, at times rather insistently, tonalities that Bailey nonetheless effortlessly avoids—especially in moments on the lengthy "Improvisation 1." When Rutherford switches to trombone, which he plays for the bulk of disc one and for all of discs two and three, he coils lines around Bailey's, sometimes accenting and extending, sometimes cutting off. Guy is his usual percussive self. There is, of course, no narrative flow as such to this music; rather, it progresses by the creation of evanescent soundscapes that vanish almost as quickly as they appear. Many are fascinating, especially on disc two, which is the one to which I found myself returning most often. But to isolate them is to try to catch a snowflake and frame it.

So it is with all of Derek Bailey's music—as well as that of the other two. Certainly Rutherford brings a certain dash to these sessions, whereas some of the guitarist's other partners let matters slip into the cagiest of murmurings. Thus these three discs may be good entry points for those who want to hear what Derek Bailey can do as an improviser, and how he interacts with other masterful free musicians. In any case, this is a superabundance of gripping music that amply rewards close listening.