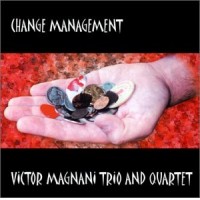 Here's how to stock a well-oiled quartet. Fill up with Andy Alonso on bass Mark Banfitch on drums Billy Gagliardi on saxophones Victor Magnani on guitar give them free reign on the improv solos, find some not overtaxed tunes from the likes of Rowles, Strayhorn and those cats, plug in an intimate setting, and you can't really be disappointed. Close to an hour is spent on this relaxed and washed collection of instrumentals, led by the guitar man with the overdue debut. Magnani's been playing the NY scene for 20 years, but never got around to putting his breezy style on disc before.

Can't quite see why it's called a trio AND quartet, when all tunes are credited to the four guys, but what's in a name? These ten tracks are going for cool summers, and they accurately achieve that ice tea flavor, lemon and all.

A few of the cuts are more blues than jazz, like the slothful "Sing Me Softly of the Blues" (of course), from Bley's side of the pen. Trouble is, on this type (and there are a few of them: "Chelsea Bridge" is another), while Victor lights up his electric for spinning out an easygoing melodic riff, the drummer (I assume) keeps stirring the pot up with noise. I keep having to pause the CD to make sure it's not someone in the backyard walking through leaves. Gets a bit distracting.

So, while you might want to stick with some of the fuller tracks like "Good Bait," remember this is a guitar album. Most songs start out slow and build and build onto that annex. "Good Bait" is an experiment in smooth jazz, just to prove they can do it. And do it, they can. Still, it's not the sound of the CD, merely a part of it. (Now I know it's a Trio as well—saxophonist Gagliardi doesn't get his finger into every pie shown.)

From the first notes of the ten, we know whose release this is. "Body and Soul" has Magnani sitting there all alone for a moment, showing off his '60s style of soft pluck. Then the sticks come in, the bass hovers, and the entire unit takes us into a grand Peanuts session: a fine opening for a seasoned string jockey.