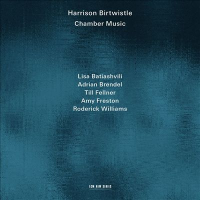 Released in celebration of composer Harrison Birtwistle's 80th birthday; his Chamber Music on the ECM label, is a collection of introspective, minimalistic and superbly abstract mesmerizing works. The four pieces share a subtle yet definite theatricality and a sense of deep contemplation that has a visceral impact.

His "Trio" opens with pianist Till Fellner's furious, rapid-fire percussive notes followed by the gentle brooding strings. This contrast sets a tense ambience that is maintained throughout the composition by alternating Fellner's independent and assertive monologues with violinist Lisa Batiashvili's and cellist Adrian Brendel's angular yet supremely lyrical duets. The trio only plays together briefly in a cinematic conversation that features Batiashvili's agile and expressive bowing together with Fellner's sparse, evocative tones and Brendel's pizzicato punctuation. The stimulatingly vivid divergence is not only between piano and strings but there is also an intriguing and provocative stylistic distinction between Batiashvili and Brendel. While the former has a radiantly supple eloquence the latter brings an understated and darkly hued quietism to the performance.

Brendel showcases his versatility and his nimbleness on "Bogenstritch —Meditations on a poem of Rilke" incidentally written for his father the late pianist Alfred Brendel. Sandwiched between baritone Roderick Williams' two Lieds are three reflective piano and cello dialogues that range from the sparse and hypnotic "Variations" to the poetic and fiery "Lied Ohne Worte." On the latter Brendel's angular and melancholic solo demonstrates brief bursts of passion while on the former both him and Fellner make deft use of silent pauses to weave their musical tale. Fellner's thick chords and Brendel's furiously alternating con-arco and pizzicato flourishes flow in a tight, rhythmical dance on the stimulating "Wie Eine Fuge," the fourth movement of this absorbing opus. Williams' haunting, buttery voice unfurls over Fellner's carefully scattered keystrokes with mysticism on the first song while his smooth, pleading articulation glides over Brendel's reverberating strings on the last with a prayer like spirituality.

But Brendel's shining hour is his sublime accompaniment to soprano Amy Freston's entrancing interpretation of twelve of objectivist poet Lorine Niedecker's short yet complex and compelling verse. Their superb camaraderie allows them to seamlessly reflect Niedencker's haiku like serene wisdom. Brendel's bowed phrases, ending in a thump of plucked strings, set an expectant ambience around Freston's immaculate, chant like singing on "Always North of Him." Freston's vocals rise and fall in nimble, and fragile beauty over Brendel's shimmering, undulating tones on "O Late Fall." Meanwhile on the "Hear Where Her Snowgrave Is" Brendel sets a somber atmosphere for Freston's evocative and mournful aria.

With this series of intimate, often dramatic, frequently pensive and always captivating musical creations, Birtwistle demonstrates why he is one of the most compelling and innovative living composers. The disc, with its impeccable sound, is both emotionally and intellectually gratifying.