By Mark Sullivan
June 3, 2017
Sign in to view read count
Cantaloupe Music is the record label created by the three founders of New York's legendary Bang on a Can organization—composers Michael Gordon, David Lang and Julia Wolfe—with Bang on a Can managing director Kenny Savelson. Since its 2001 founding it has featured music from Bang on a Can and other contemporary musicians making concert music a little too edgy and funky for the academic world. It is still home to a wide variety of music, as demonstrated by this sampling of releases from the last few years. 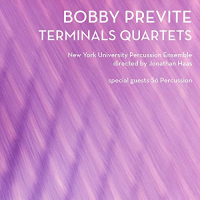 Bobby Previte
Terminals Quartets
Cantaloupe Music
2017
Percussionist Bobby Previte composed an earlier piece called TERMINALS (Five Concertos for Percussion and Soloist) that utilized a percussion group as concerto orchestra behind soloists on harp, guitar, piano and saxophone. Terminals Quartets revisits the concept with So Percussion again playing the orchestra role, but this time the soloists are members of the New York University Percussion Ensemble, directed by Jonathan Haas.
It should go without saying that the full range of percussion sounds are explored. After a grand opening statement "Terminal A" spends a great deal of time in quieter territory, although dynamic contrast is always an option. "Terminal B" begins with a conversation between gongs and drums, while "Terminal C" features a rhythmic tattoo on mallets and tom toms. The closer "Terminal E" employs repeated rhythmic figures reminiscent of composer Steve Reich (and generous amounts of silence). An aural feast for percussion fans, the only weakness being the occasional difficulty of telling the soloists and backing percussionists apart—something that would be far easier in live performance with the aid of visual cues. 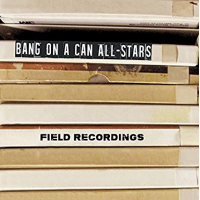 Bang on a Can All-Stars
Field Recordings
Cantaloupe Music
2015
Band on a Can began commissioning new pieces for its ongoing, multimedia Field Recordings project in 2012. As the title implies, the composers were asked to use recorded sound—something old or something newly recorded—and to respond in dialogue with their own music. The twelve pieces here are extremely diverse, even by Band on a Can standards.
Julia Wolfe's "Reeling" uses a French Canadian vocal reel, accompanied and expanded by a chamber ensemble. Florent Ghys' "An Open Cage" uses John Cage texts. There is no pitch information in the source, but the music takes rhythmic cues from it. Christian Marclay's "Fade to Slide" uses video (and its audio track) to prompt live musical reactions—while the audio recording can stand alone, there has to be a missing dimension without the accompanying video.
Among the other notable contributions, Tyondai Braxton's "Casino Trem" uses arpeggiated major chords from a choir of slot machines. Todd Reynolds' "Seven Sundays" incorporates samples from southern Baptist preachers from an old LP, voices with a quality somewhere between speech and singing. And Bryce Dessner's "Maximus to Gloucester" uses an epic poem by Charles Olson, the last president of Black Mountain College, the experimental art college in the North Carolina mountains. Olson's recitation is accompanied by music to dramatic effect; in many ways the most conservative treatment in the collection. 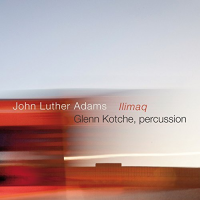 John Luther Adams & Glenn Kotche
Ilimaq
Cantaloupe Music
2015
An electro-acoustic soundscape with solo percussion, written specifically for Wilco drummer Glenn Kotche. The electronic part includes contemporary electronic sounds, Alaskan field recordings, and other found sounds from the natural world. The percussion part employs three stations: the first with concert bass drum; the second with seven suspended cymbals and tam tam; and the third with eight tom toms, two bass drums, eight cymbals, bell cymbals, wind gongs, and crotales.
Once again the piece employs percussion to create a wide range of textures and moods. "Descent" uses the concert bass drum for a tribal beat, while "Under The Ice" and "The Sunken Gamelan" both feature quiet cymbal sounds—bowed, scraped, and slow washes with beaters. In fact the composition as a whole moves from loud to soft. "Untune The Sky" tends towards a low rumble, with rolling cymbals and clattering drums, while the closing "Ascension" is a slow fade-out. 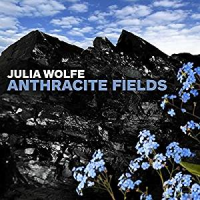 Julia Wolfe
Anthracite Fields
Cantaloupe Music
2015
Julia Wolfe's Pulitzer-Prize winning oratorio for chorus and instruments deals with the coal-mining industry in an area close to where she grew up in Pennsylvania. "Foundation" has the singers chanting the names of miners who appeared on a Pennsylvania Mining Accident index. There's a quiet, atmospheric opening, which is broken by instrumental outbursts. "Breaker Boys" starts out as a choral piece about the boys who broke coal into pieces and graded them, then it goes into a rock-influenced song.
"Speech" uses an excerpt from a speech by John L. Lewis, president of the United Mine Workers of America from 1920 -1960. Lewis' words are presented dramatically by a soloist, echoed by chorus and instruments. "Flowers" presents a more personal view of miner's lives, listing the names of flowers common to gardens in the impoverished miner's homes. The closing words of "Appliances" are taking from an advertising campaign for the coal-powered railroad, promoting the clean ride, a powerful contrast to the blackened faces of the miners underground. 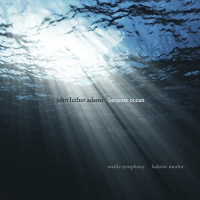 John Luther Adams
Become Ocean
Cantaloupe Music
2014
Become Ocean is a stunningly beautiful, immersive experience, utilizing an orchestra divided into three distinct sections. The three groups each follow their own rhythms, eventually coming together at the peak of three massive crescendo-like waves. I was fortunate to hear it performed live at the 2016 Big Ears Festival, and had no doubt that its 2014 Pulitzer Prize award for music was well deserved. No recording could completely do it justice, but this performance by the Seattle Symphony under the direction of Ludovic Morlot was good enough to win the 2015 Grammy Award for Best Contemporary Classical Composition. 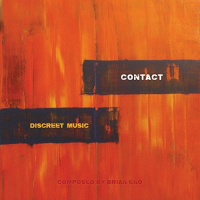 Contact
Discreet Music
Cantaloupe Music
2015
Toronto's classical Contact ensemble arranged Brian Eno's classic ambient electronic work Discreet Music for the 40th anniversary of its release. This adaptation for live instruments recalls Bang on a Can's arrangement of the later Music for Airports, released as both a studio album (Point Music, 1998) and a live recording (Cantaloupe Music, 2008). In some ways Discreet Music presents more of a challenge, since the original was created using a synthesizer which played two sequenced melodic lines of different lengths into an open tape loop system.
Contact thus had to arrange simple electronic melodic information for acoustic instruments and emulate the random overlays created by the tape delay. The recording is divided into seven parts (totaling about an hour), each with a slight shift in instrumentation. This captures the minimalist, meditative mood of the original, while introducing a bit more timbral and dynamic contrast. A refreshing approach to Eno's concept, and a perfect bookend to the live instrument version of Music for Airports.