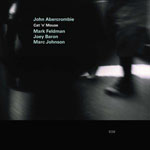 First and foremost, Cat 'n' Mouse is a game among equals. The members of this quartet are each powerful musicians in their own right, and somehow they've made a treaty to serve a common cause. Guitarist John Abercrombie takes the lead on the opening track, "A Nice Idea," with an extended lyrical melody seeping with melancholy. His rhythm section (Joey Baron on drums and Marc Johnson on bass) yield understated support while Abercrombie pursues his leisurely theme and subsequent improvisation. But it's not long until violinist Mark Feldman steps onto the stage and extends those ideas several orders of magnitude. Feldman, who's been in and out of avant jazz since his Nashville days, brings the group to an emotional head when he leads the quartet to a point of stark emotional climax. And from there it's back to lyrical reflection.

And that's the pattern for most of his recording. For the most part, the mood is quiet, understated, and melancholy (reminding this listener of the billowing sweeps of 1993's classic November, which also featured Abercrombie and Johnson). All but two of these pieces are Abercrombie compositions, but each member of the group makes his own mark. "String Thing," for example, brings stark, haunting strains from Feldman that suggest toned-down echoes of his work with John Zorn's Masada. The two compositions shared among members of the quartet suggest collective improvisation with their fluidity and density of interaction. (And they work all that much better for the shared expertise of the band's members.)

Not content simply to dwell in the minor spaces, the group emerges on "On the Loose" with a light funk groove. Drummer Joey Baron seems right at home here, offering just the right number of hints without falling into cliché or rigidity. A personal favorite, this tune serves up just the right amount of simmering energy to make its emotional shifts and surprises dramatic. More than any other, it typifies the type of game hinted at in the album's title.

Of course there are moments on Cat 'n' Mouse where the quartet just doesn't quite coalesce, and at times like this they sound like four strong players going at it simultaneously—but not together. Those moments are rare, though, and the disc is an overall success. It's a wonderful showcase for the magic that can happen when four independent-minded players are uprooted from their usual zone and placed into a new, intimate context. Cat 'n' Mouse definitely ranks among John Abercrombie's freshest and most vital work.