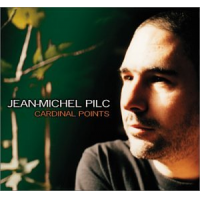 Unlike many modern pianists, particularly those working in trio settings, Jean-Michel Pilc does not emulate the emotional vulnerability displayed and established by Bill Evans, that tight-rope walk of sensual suffering which both established the relevance of classical training to jazz and expanded the palette of emotive texture.

Courageously, Pilc reveals what few performers confront: it's not the specific persona revealed that denotes personal expression, but the willingness to display one's interior space. For Pilc, that means exposing not only an astute emotional landscape, but also a tremendously lucid and restive mind. There are no stable points of reference in Pilc's compositions or playing, and this is its fundamental brilliance.

Pilc employs a quartet for the first eight pieces of the album, the sonorously inviting "Fred's Walk,"; the diverse, blistering series "South," "West," "North," and "East"; "Ari's Mode," "Cardinal Points," and the album's only standard, "Mood Indigo." The spectrum of sound and rhythm presented here is downright remarkable, particularly the unusual use of percussion instruments, not to mention the pyrotechnic quality of musicianship.

Each a unique achievement, these eight volcanic explorations presage with their tumultuous diversity the album's culminating experience, the four part "Trio Sonata." This stunning coup was composed for and performed by Pilc's standing trio, revealing the lasting effect of Evans on Pilc's style, an influence he both acknowledges and uses as springboard. Both compositionally and in performance, this extended piece stands as a provocative example of jazz and classical integration, as well as group improvisation.

With Cardinal Points, Pilc offers a highly demanding sonic challenge, the cerebral quality of which is rivaled only by its personal eloquence. This deserves not only several listens, but deep contemplation.