By MIKE PERCIACCANTE
January 30, 2009
Sign in to view read count 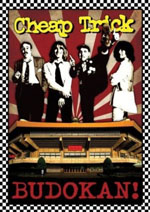 In 1978, Cheap Trick was a little-known rock band from Rockford, Illinois toiling and touring, mostly as a supporting act. One year later, after the release of At Budokan (Epic Records, 1979), Cheap Trick was a multi-platinum act headlining the biggest arenas and venues in the world. Now, thirty years later, in its third incarnation, Cheap Trick comes roaring back with this 3 CD/1 DVD collection documenting its finest moment. The 20th Anniversary incarnation was the 2-CD set, At Budokan: The Complete Concert (Epic/Legacy, 1998), merging At Budokan with Budokan II (Epic, 1993) (which collected the remaining tracks from the concert not included on the original album).

Recorded in Tokyo on April 28, 1978 and broadcast on Japanese TV, band's other Budokan appearance two days later was taped as well, with plans to release a Japan-only live album. When At Budokan became a huge hit in Japan, word-of-mouth traveled to the U.S. and the album was released domestically after racking up significant sales as an import. It was a smash, reaching #4 on the Billboard 200 Chart. At Budokan's louder, stronger and rockier live performances clearly outshined studio versions of Cheap Trick's early songs. "I Want You to Want Me" and "Surrender" became modern classics that continue to receive rock radio airplay.

Highlighted by Tom Peterson's chunky, funky, plucky bass, Rick Nielsen's crisp clean, blasting guitar, drummer Bun E. Carlos' bombastic and tasty backbeat and Robin Zander's soaring vocals, this reissue brings Cheap Trick's ferocious early live shows to new light. Along with the band's classics, the best tracks from the original album—"Hello There," with its blasting opening guitar riff; the cover of Fats Domino's '50s hit "Ain't That A Shame"; the power-pop mastery of "Big Eyes"; the urgent "Clock Strikes Ten"; and the pleading, spellbinding "Need Your Love"—have been augmented with "Elo Kiddies," with its alternative Gary Glitter-type thump and the punky, crunch of the closing "Auf Weidersehen," amongst others.

The DVD of this four-disc package is the first commercial release of the 15-song Japanese television broadcast that was aired only once in Japan. In addition to concert footage, bonus features include two additional songs taped at Budokan in 2008 ("Voices" and "If You Want My Love"), as well as "Come On, Come On," which was not included in the original broadcast, and a 2008 interview called "Looking Back." The DVD also includes a pristine new 5.1 Surround Sound mix.

The first CD replicates the audio of the Japanese TV concert with the addition of "Big Eyes," "Need Your Love" and "High Roller." The second and third CDs contain the complete nineteen track re-mastered Budokan concert, with songs culled from the April 28th and April 30th performances.