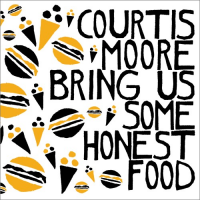 Bring Us Some Honest Food marks an important landmark for Dancing Wayang. Since its first release, A Gold Chain Round Her Breast by Motor Ghost, in 2007, this is the label's tenth album. That total of ten records in eight years is indicative of the care and attention that is lavished on every aspect of each of the label's limited-edition vinyl albums. As has become customary on Dancing Wayang records, for Bring Us Some Honest Food the pairing of Alan Courtis and Aaron Moore have used the recording to experiment.

The Courtis-Moore duo dates back to 2007 when they collaborated on their record Brokebox Juke (No-Fi, 2009), each playing a range of instruments far beyond those they are best known for, Courtis having been guitarist and multi-instrumentalist of the Argentinean trio Reynols and Moore the drummer, trumpeter and vocalist of Volcano the Bear. Subsequently, on the excellent Courtis/Moore (Earbook Recordings, 2010) and other albums, the duo favoured guitar and drums—as exemplified by the 2014 YouTube clip, below.

For Bring Us Some Honest Food they returned to a methodology more akin to that adopted in 2007. Then, their extended lists of credited instruments included homemade violin, bells, synth, processing and objects for Courtis, plus thumb piano and even beard trimmer for Moore. When the pair recorded, on March 22nd 2014, at London's Fish Factory Studio (as Dancing Wayang's usual Eastcote studio was not available that day), they took advantage of every available thing there that could be used to produce a sound; a full list is not provided, but it seems to have included guitar, percussion, vocals, trumpet, grand piano, balaphon, metal lampshades and wooden staircases. According to Dancing Wayang's Anna Tjan, they recorded some four hours using such sources and more, and these recordings were then used to produce the forty minutes that appear on the disc.

Courtis and Moore returned to another method of working that had proved successful before, using the recordings to create the record's finished tracks after the day of recording, back in Buenos Aires and Brooklyn, respectively; side one consists of three tracks by Moore, side two a single extended track by Courtis. In an interesting use of language, rather than describing that process as post-production, mixing, editing, processing, compiling, constructing or otherwise, Moore and Courtis are each credited with having "blended" their side of the album. In fact, that description seems very appropriate, as the process feels more akin to cookery or making a cocktail—taking ingredients and putting them together in the right quantities and combinations to achieve a satisfying end product that exceeds the sum of its parts. While it is implied that each worked independently of the other, Moore and Courtis refer to their past "postal collaborations," so it is not unreasonable to surmise that electronic (and other) channels of communication were open between the two.

Crucially, the end results blur the distinction between improvisation and composition, the fruits of the day's improvising having been blended over time into a considered, coherent totality which contains some unexpectedly soothing and relaxing passages, notably from Courtis's acoustic guitar. Along the way, there are some surprises—a chant-like vocal quote from War of the Worlds springs to mind, as do some inspired electronic passages —and plenty of variety, but no shocks. As with any recipe, the dish that is served up reflects the quality and diversity of the ingredients that went into it. The final result makes compelling listening and is sure to draw listeners back to it again and again. Altogether, it is more than worthy of joining the pair's already impressive discography.